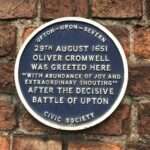 A blue plaque hangs on a wall in the Worcestershire town of Upton-Upon-Severn. “29th August 1651. Oliver Cromwell was greeted here “with abundance of joy and extraordinary shouting” after the decisive Battle of Upton.”

Perhaps the people of the town had not yet experienced the misery Cromwell would bring, perhaps they still retained the idealism that had once motivated the soldiers of the Parliamentary armies.

Read the accounts of The Putney Debates now and they recall that the men who fought for Cromwell in battles like that at Upton were men who had set out with high ideals. The soldiers were evangelical Christians, men whose daily lives were shaped by Scripture and prayer, they believed everyone should pursue their own conscience, that no government had a right to impose religion.

In An Agreement of the People issued on 28th October 1647, they declared:

That matters of religion and the ways of God’s worship are not at all entrusted by us to any human power, because therein we cannot remit or exceed a tittle of what our consciences dictate to be the mind of God, without wilful sin.

The Levellers, the soldiers who took part in the Putney Debates, had no place for an established church, no place for secular powers being used to dictate people’s religious beliefs or their practices.

The Levellers’ vision extended much further than matters of religious belief, there was a belief in universal suffrage, an idea that their opponents claimed could only lead to anarchy and an end to private property. On 29th October 1647, after a morning prayer meeting, the soldiers had resumed their debates. Colonel Thomas Rainsborough, who became a heroic figure for the Levellers, declared during the debate:

For really I think that the poorest hee that is in England hath a life to live, as the greatest hee; and therefore truly, Sr, I think itt clear, that every Man that is to live under a Government ought first by his own Consent to put himself under that Government; and I do think that the poorest man in England is not at all bound in a strict sense to that Government that he hath not had a voice to put Himself under.

The poorest man has as much a life to live as the richest man: a declaration of the dignity and rights of every person, rights that were about more than a matter of words or principles, right that had direct political implications.

Had Cromwell arrived in Upton with the ideas of Rainsborough, there would have been a cause for joy and shouting. By 1651, such hopes had gone. 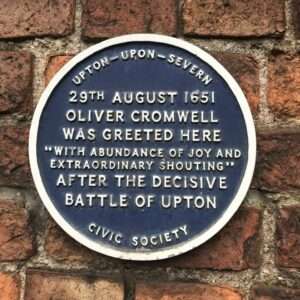