6th January 1991 was a Sunday. I went to the Mass at the cathedral and had then gone to visit a village, where we had corned beef for lunch. It is odd what details remain in the memory.

1991 had begun in the Filipino city of Baguio. The bus our group was to catch in order to travel to a village in Mountain Province did not arrive, there were mutterings that the driver must have over-indulged the night before.

“Tomorrow,” shrugged a man at the bus station.

A phone call was made, a taxi hailed, and we returned to the comfortable lodge in which we had celebrated the New Year. A day was spent visiting the city, eating in restaurants, and sampling local brews. The next morning we returned early to the bus station.

Sitting waiting on the pavement there were people who had been there the previous day. Had they been here for twenty-four hours? If the only money they had was for their fare and for food from street vendors, their options for entertainment and accommodation would have been limited. they looked at us without a flicker of expression.

On Wednesday, 2nd January 1991, we caught the Rising Sun bus which carried up into Mountain Province. The Philippines still had dangerous areas, the low intensity conflict between the Aquino government and the New People’s Army still claimed lives and terrorised communities. Mountain Province had its share of troubles, the village to which we were going had seen men shot by the army.

Looking back, the three nights spent in the little village of Kayan near Tadian seem much longer. The isolated rural community lacked many of the most basic amenities, the road to the village was mud and stone and inhibited easy transport. Walking out across the rice fields, we visited subsistence farmers whose simple houses were without running water and without electricity. The community nurse in the village aspired to having a refrigerator in which medicines might be kept. Yet there was a rich community life in a situation where there was frequent absolute deprivation

By Saturday, 5th January, it was time to move on. We would catch the Rising Sun bus at 4 am. Sleepily, we gathered at the centre of the village, where there was already a buzz of activity with women already about their daily chores.

The single deck Rising Sun bus, with its huge knobbly-tyred wheels rolled into the village, it was full. Not full in the European sense, full in the Filipino sense. This was a country where we had counted 15 people on a motor bike and sidecar. There was a quick exchange of words and our bags were lifted inside the bus and hands reached down to pull us up onto the roof.

We were going to make a journey on mountain roads that were no more than dirt tracks riding on the roof of a bus (I feared there might be some exclusion on my insurance policy). It was fine getting up, the problem was that there was very little to hold onto. I took a firm hold on a wire rack with one hand and a firm hold on the arm of our Filipina guide with the other, “This is very dangerous”, she said, “very dangerous.”

At more than one point as we cornered and our view was the sheer drop into mountain ravines, I thought that we perhaps should have listened to the guide’s advice.

I went back to the Philippines in 2001, the country had improved almost beyond recognition, but the spirit of people who rode on bus roofs remained unchanged. The community, the laughter, the willingness to work and the warm hospitality remained as strong as ever.

The Rising Sun bus and corned beef for lunch remain memories of a world entirely removed from the triviality of so much of life here, a world where celebrity and sporting news is of little consequence, a world where the business of life was survival. Riding on the roof of a bus made the world look different. 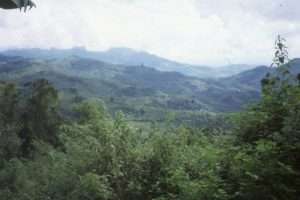