“The world,” said Ludwig Wittgenstein
is everything that is the case.”

Encounters with Wittgenstein are infrequent now. Academic philosophy is not the stuff of everyday secondary school conversation. Meeting the philosopher in Australian poet Gwen Harwood’s poem Last Meeting was a moment like that when you meet someone out of their normal context and are taken by surprise at the encounter.

It is five or six years since I last met the name of Wittgenstein. Talking with an ageing priest whom I knew to have worked in the missions, I asked him where he had worked before.

“I was in West Africa, in Port Harcourt in Nigeria, and in Ghana and The Gambia. It wasn’t an easy place to do business; it’s very different there . . .” He had tailed off, as if trying to recall something

“Yes”, I had paused. “The borders drawn by the European imperial powers did not help things – The Gambia seems to be just two banks of a river.”

“The nation state,” he said. “That’s the problem. In Europe we are busy trying to reconstruct the Holy Roman Empire that we spent centuries dismantling. The Christian states that were across Europe were destroyed in favour of nation states and the god of democracy.”

Was he advocating a return to medieval monarchies and autocratic rule? Should we be hoping for a return of the dozens of principalities that once coloured the maps of Europe? It’s not as though the pre-modern kingdoms of central Europe were exactly models of perfection, but it hadn’t seemed worth the effort to point out that most of the population in medieval times lived in poverty, if not absolute misery.

“A belief in materialism is our problem,” he asserted.

“Do you mean a belief in logical positivism?” I asked him. “Reality is what you can see and what you can touch? Wittgenstein and all that?”

“Yes, him,” he said, “do you know Parkgate Street in Dublin?”

“Near the Phoenix Park?”

“Yes, there. Do you know that Wittgenstein spent the closing years of his life in a room above a bar in Parkgate Street? He would send down for what he needed and they would send him supplies up the stairs – nearly all drink.”

Wittgenstein was one of the 20th Century’s greatest philosophers, an academic of world renown, but to have argued with the priest that he did not end his days in the upstairs room of a pub would have been pointless. The moment had been reached when the realisation came that the man was not someone of antediluvian political views, but someone suffering the onset of dementia.

Wittgenstein did spend some months staying in a hotel not far from Parkgate Street, but spent his time there working, and continued the life of an academic when returning to Cambridge from Dublin. The priest had obviously felt such an antipathy towards a philosopher who had rejected medieval world views that he had constructed a scenario, from stories he had heard in Dublin in the 1940s or from his own imagination, where Wittgenstein died alone having been sustained only by whiskey in his final days.

If Wittgenstein can appear in the lines of a poem on parting, perhaps someone might find lines from his philosophy to capture a sense of the loss of a person who stands alive but departed from the person they had been. 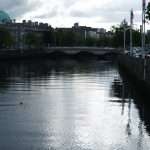