19th March is the feast day of Saint Joseph the worker, it seems an appropriate day to think about working class politics. 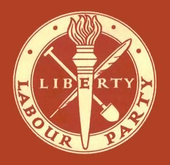 ars, I belonged to the British Labour Party. It was a time when the party was closer to its traditional roots, when it was the natural party for working class voters, when there would have been no prospect of the so-called “red wall” of Labour held constituencies falling to Conservative candidates

The rebranding of the party under Tony Blair was still of a thing of the future. The party membership card still had the old crest on it. There was no rose logo in those days, instead there was a torch that was crossed by a pen and a spade.

The symbolism of the crest was simple: the torch was the light of liberty and it was to be achieved by the co-operation of workers, represented by the spade, and intellectuals, represented by the pen. Neither was superior and neither was inferior, each had a place in society, each made a valid contribution to the common wealth.

The idea of workers and intellectuals both being necessary for the well being of society wasn’t a concept that was confined to the political left. During my years in Northern Ireland, I remember a Roman Catholic colleague talking about the reorganisation of Catholic schools in part of the city of Belfast. There were two schools that were to be merged, one was named after Saint Thomas Aquinas and the other was named after Saint Joseph. My colleague thought this was an excellent mingling of identities, there were those who were under the patronage of the Thirteenth Century intellectual Aquinas and there were those who were under the patronage of Joseph the worker, the wage earner for the holy family.

The Labour Party too often seems to have forgotten the Josephs. The party has become an amalgam of minority interests, there are policies concerned with advancing the interests of every minority group, but a frequent failure to protect the traditional working class communities for which the party was founded in 1900.

If there had been less emphasis on the policies of the intellectuals, those in the tradition of Aquinas, and more concern with those who laboured as Joseph had done, the Brexit referendum would not have been lost and Johnson would not have become prime minister.

It is never likely to do so, but the reinstatement of the old crest might remind the party of the coalition it is meant to represent.