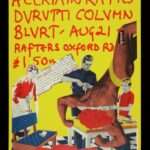 On Chris Hawkins’ BBC Radio 6 programme, the weekly “My Space” feature was not about someone’s home, as is usually the case, but instead was a presentation of Use Hearing Protection, an exhibition telling the story of Factory Records’ formative years from 1978 to 1982 at the Science and Industry Museum in Manchester. The curator narrating the visit described a poster for a concert featuring the bands A Certain Ratio, Durutti Column, and Blurt.

Durutti Column? I remembered the name. It appeared in a piece in the LSE student newspaper forty years ago about the line-up for a music concert, “Manchester cult band Durruti Column” were to play, wrote the aspiring journalist.

“What was a cult band?” I had thought. “Does that mean they have no mainstream following? How many fans are needed to make them a cult? What’s ‘Durutti Column’, anyway?”

It was thirty years before my question was answered. I was reading Edward Stourton’s book Cruel Crossing: Escaping Hitler Across the Pyrenees. It was an account of those who had found refuge by passing through the Pyrenean countryside during the Second World War. Writing of those who had fled from Franco’s Spain at the end of the Spanish Civil War and of the Le Vernet internment camp, Stourton says it, “became home to the Durutti Column of Anarchist Republican troops”.

The band who had recorded at Factory Records, whose performance had been advertised on the poster, had taken their name from defeated soldiers, but why?

Memories of the Spanish Civil War were still recent in student days: the young men who had gone off in their twenties to join the fight against Franco were still only in their sixties.

The London School of Economics was probably not typical of English colleges, but reprints of the posters from the 1930s were still pinned to the walls of student rooms.

Spain seemed a place of flamboyance, of colour and vibrancy. In the pages of Laurie Lee, it became a place where anything seemed possible, even for a youth no older than the one struggling with undergraduate essays. Sunshine and red wine are perhaps more conducive to irrational exuberance than grey dampness and flat beer.

Forty years on from losing the Spanish Civil War, those sympathetic to the losing, Republican side could still pin up posters with pride, and could even name a band after fighters in that conflict.

Even in theological training the vision of Spain as being a place of verve, vivacity and reckless heroism continued. A classmate, (who was to be murdered in his Rectory in 1990), would tell stories of his uncle Robert, a Church of Ireland cleric who had died in Spain, fighting against the Fascists.

In contemporary culture, is there an equivalent of the role played by Spain in times past? What would Durutti Column call itself today? What would appear on the poster? 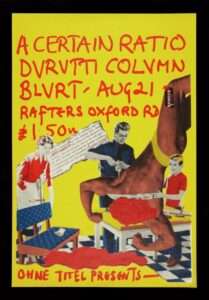