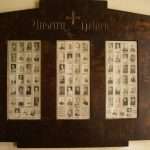 “Sir, it’s the 107th anniversary of the assassination of Archduke Ferdinand,” said one of the Year 8 class.

The war depended on the demonization of the enemy, otherwise its pointlessness would have quickly become apparent to anyone not seized by an insane appetite for blowing working men to pieces. Fraternisation of any sort threatened the propaganda from both sides that they were fighting on the side of God against the forces of evil, German army belt buckles were even inscribed with the words, “God with us.” Moments like Christmas 1914, when the soldiers realized those on the other side of “No Man’s Land” were not much different from themselves, contradicted the images sown by the high commands.

When the enemy is made of the same flesh and blood, with the same hopes and dreams, and shares the same anxieties and fears, it is hard to inculcate a desire to run him through with an 18 inch bayonet.

The losses of 1914-1918 obviously had a profound effect upon a traditional, rural community. The village organized itself to procure photographs of each of the fallen and to incorporate them into the memorial. Dozens of youthful faces stare out across the decades, eyes staring through history. “Unsere helden” declares the inscription above the photographs, “our heroes,” although it is hard to imagine there were many families who would not have preferred a live son, husband or brother to one who was a dead hero.

Even among those familiar with the history of the First World War, the battles in which many of the Austrian soldiers fell are hardly remembered now in Western Europe. There are battles like that at Piave River in 1918, a battle fought between Italy and Austria-Hungary. It cost 43,000 dead or wounded and 50,000 captured on the Italian side and 60,000 dead, 90,000 wounded, and 25,000 captured among the forces of Austria-Hungary. 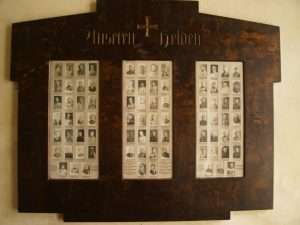