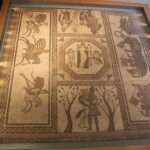 It was on this day in the year 410 that the city of Rome fell to the invading Visigoths. The end of the Roman occupation of Britain had begun twenty years earlier, the last Roman magistrates were expelled from Britain around the time that Rome fell.

Yet in those closing years of the history of the Empire, there was still a confidence about the future. Sixty years before the fall of Rome, around 350 AD, it must have been fairly peaceful around Low Ham. A large Roman villa was built, and not just a villa, but a villa with a bath house that had a mosaic floor that was fourteen feet by fourteen feet.

The mosaic floor, discovered in 1938, is now a centrepiece of the museum of Somerset, one can stand in a gallery and look down on it and ponder the imagination and the expense behind a floor that depicts the story of Dido and Aeneas. It would hardly have been a matter of building to impress the neighbours, the settlement would have been more remote then than it is now.

It is possible to stand in my mother’s house and look the fields to the side of the valley on which the villa was built. What might have the community been like? The people behind this extraordinary work of art, were they very different from their peers or was there a widespread profligate desire for beauty for its own sake? It would certainly have been a matter of beauty created for the sake of beauty, there would have been few people who would have experienced the frigidarium for which the mosaic provided the floor.

Drawn from the work of the First Century Roman writer Virgil, the depiction of the classical story is said to be the first piece of narrative art in the country. The commission and execution of the work demanded a high degree of educational and cultural sophistication, how did such people find their way to Low Ham?

More than culture and education, though, investment in such a piece of work indicated a high degree of confidence about the future, one did not make such a substantial investment unless one felt a strong sense of safety and security. Local inhabitants must have been regarded as peaceable neighbours, even if uncouth, and the occupants of the villa must have been regarded with a sense of awe by those who lived in primitive conditions.

The Romans who regarded Low Ham as their home left little trace of their own story, little clue as to who they were and what they were like. There is a sense that these were mysterious people, reclusive, detached, filled with imagination; these were people who left so much beauty and so little of themselves. 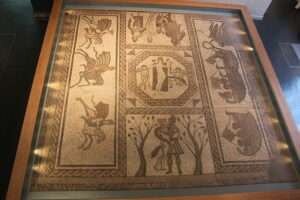