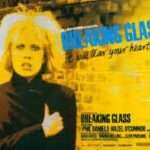 Before returning to live in England in 2017, I had intended writing to Hazel O’Connor and thanking her for the music that got me through the dark days of 1980 and 1981. It would have been an odd letter to have sent, but would have been a heartfelt letter of thanks.

However, the dark clouds rolled in again and I left Ireland and to have written from England would have seemed an odd thing to have done. Back in Dublin, perhaps I should finally put pen to paper.

I had attended the London School of Economics for two terms from October 1979, but had then dropped out. The university administration was very gracious, and gave me a year off.

The summer of 1980 was spent in nothingness. By September I had to do something and I found a post through an organisation called Community Service Volunteers. The voluntary post came with board and lodge and £10 a week pocket money.

While the school for boys with intellectual disability was run by a Catholic religious order, my housemates were preparing to be Hindu monks. There was no television in the gate lodge in which we lived, no radio, and only an elderly portable record player on which to play the handful of old LPs they had. Their conversation was often esoteric religious stuff. There was not much in it to interest someone approaching his 20th birthday who had no religious background. The best moments were when they got out their Woodstock triple album and talked of times when it seemed that the world could have been a good place.

It was a frequently lonely. The pocket money didn’t go far, not that there was much to spend the money on. I might have a pint at the local pub or make occasional visits to the cinema to see things that were even half interesting. Sometimes the dark shadows of depression would again close in and the whole experience would seem like an odd play in which I was no more than an onlooker.

Slowly I began to buy odd records of my own. These were greeted with scorn and derision by my housemates. I still laugh at memories of them singing their own words to Blondie’s Atomic, inserting “elastic” at each point that Debbie Harry sang “atomic.” They were good blokes; just from a generation before the rough-edgedness of punk.

One film and one record got me through, Breaking Glass in which Hazel O’Connor played the rock star, Kate. The film tracked the meteoric rise and fall of the fictional rock star. Her fall comes with deep depression, and the angst and melancholy of the music express the pain of being unable to communicate from behind a wall of darkness.

The film was shown at the cinema and I bought the album at a record shop. I played it, again and again. The lyrics still come back with little attempt at recall – Breaking Glass got me through. Even if I found words to write, Hazel O’Connor will never know how much she meant to a lonely nineteen year old. 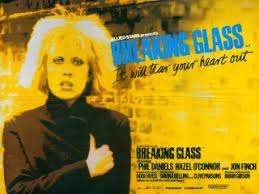