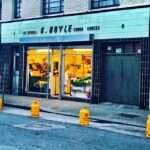 Walking down the Long Mile Road and turning into Errigal Road, where Google Maps told me that I would find a post office, there was a moment of delight – K. Doyle, fruiterer and greengrocer. The establishment had a period shopfront and appeared to be thriving. Once everywhere had such thriving, independent businesses. In our village of High Ham, the village shop was owned by Simon Spearing. The Spearings were a couple younger than I am now when we moved to the village in 1967, but Mr & Mrs Spearing always seemed of a venerable age. It was hard to imagine times when their neat shop had not been at the heart of the commercial life of the village Our commercial day began with the visit of the milkman who was called “Nipper” Knowles, I never knew his real name. He called six, if not seven, days of the week. The rattling of the crates of gold and silver topped milk bottles from Cricket Malherbie Dairies announced his progress along the road. By mid-morning Alan White, a newsagent from the town of Langport, three miles from our village, called with that day’s paper. Den Legg, who drove the bakery van from Maisey’s of Othery, called three times a week with fresh baked bread. The loaves he brought came unsliced, with thick crusts which were cut in thick slices with a breadsaw. On a Monday, David Macey’s mobile shop came from Curry Rivel at teatime. There were neighbours who would have bought shopping, but for children the attraction was the selection of sweets he carried. On a Monday evening Mr Bryant, the hardware merchant from Somerton did a round. We bought paraffin for the heaters from him, though he presumably carried a stock of other items. On a Friday lunchtime, there was a fishmonger who had a regular business in those days when people still ate fish. By Friday teatime, there was the sound of the Reema ice cream van from Yeovil, though he never seemed to get the level of custom enjoyed by the Wall’s ice cream van that came down the road on a Sunday teatime. However, Wall’s ice cream brought with it the sinking feeling that there would be school in the morning. Then, of course, along with the travelling merchants, there was Spearing’s, which was a shop where you went to the counter and asked for those things that you wanted. Around the corner, there was the post office, where Miss Hunt at one time kept sweets and lemonade, as well as stamps and postal orders. There were the informal merchants as well, men like Cliff who called on a Saturday with vegetables, and Harry, who sold vegetables along with scrumpy. The supermarket changed the entire rural economy, but let’s not pretend it was anyone but ourselves that made it possible. Like the people who complain at the closure of railways, when they drive their cars everywhere, the triumph of the supermarket over local businesses was a matter of popular choice. If the Spearings were the last people to keep a village shop, it was because we decided that would be so. Hopefully, Doyle’s greengrocer will continue to thrive. 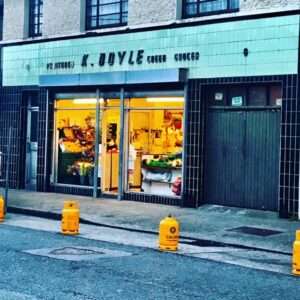