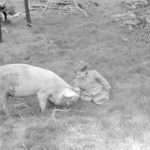 My mother has a capacity to integrate centuries of family history into one perpetually present moment.

For years I imagined that a woman of whom my mother had often spoken had lived into the mid-Twentieth Century. Only recently, whilst doing work on the family tree, did I discover that the woman had died twenty-two years before my mother had born, yet the fact their lives had never overlapped was no obstacle to the woman’s life being recalled.

Familiarity with those dead two decades before she was born means that my mother should have no difficulty in explaining an odd fact from fifty-eight or fifty-nine years ago. Why was her young son wearing his best coat to feed a pig?

And what was the pig doing in a field of grass?

Anyone who watches pigs will know that they tend to turn ground into a bare mudpatch. They eat every piece of vegetation, including its roots. They do not graze in the way that cattle or sheep do, leaving meadows green after they have been moved on. Pigs are the nearest thing the animal kingdom produces to a scorched earth policy; they leave nothing behind.

And why were there piles of branches in the background? Was somewhere being cleared for the building of something? And if it was, why was there a pig there?

The most perplexing question of all was how a small boy came to be in a field feeding a pig in his best coat.

There was a time and a place for everything and feeding a pig in a field was neither the time nor the place for the wearing of the best coat. It was behaviour that might bring a stern rebuke.

Looking back in a long retrospect, there are many things that seem as as odd as feeding a pig in your best coat, odd people, odd events, things that passed without question at the time. My mother probably cannot explain all of the mysteries, many of which were probably in the imagination of a small boy, but perhaps she can explain the pig and the coat. 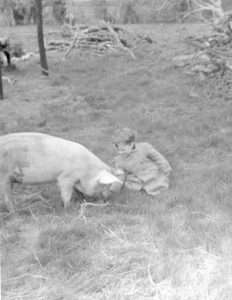