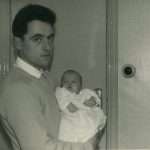 Miss Rabbage encouraged research: a history project was to be written on things that had happened on one’s birthday. Fifty years later, the three items found in the the junior classroom book that listed anniversaries are still memorable.

Were Miss Rabbage setting the project fifty years later, the web would ensure there were no omissions. But then Miss Rabbage, being the thorough teacher she was, would have left nothing out.