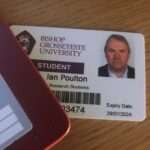 My student card arrived this morning. Posted second class in Lincoln, England on Tuesday, 12th October it arrived in a week, which is a speedy delivery in present times, even more so when the second class frank meant that the sender had paid less than half of the cost of sending a letter to Ireland.

There was simply an envelope with my address handwritten and inside it the credit card sized piece of plastic bearing a picture of me that was taken for my driving licence four years ago. It was the only picture I had that did not have me wearing glasses. The requirement to have an uncovered face seemed odd, my passport photograph had me wearing glasses and it was accepted by the passport office. Perhaps students are more likely to attempt to use the identification card of a fellow student than someone aged sixty-one.

I am not sure why I needed a student card. It doesn’t seem likely that I shall ever visit the university campus. The online login details provided by the university are much more useful, they provide access to libraries around the world and to a platform called Browzine which has innumerable journals, some of which provide reading that is entirely tangential to my research field.

The student card lasts three years, I shall require another one before my five years of study is over. But even the three year term will take me to the age of sixty-four, that milestone celebrated in the lyrics of The Beatles.

The last time I had a three year student card was when I started at the London School of Economics in 1979. Receiving the card when I registered during the Freshers’ Week that year, I remember thinking that three years seemed such a long time. The laminated card bore no bar code, no photograph, all that was personal was my signature on the reverse. Anyone could have used it.

Depression was to mean that the three years were to become four, and that I would have to receive a second card, which theoretically did not expire until 1985

Listening to Kate Bush on RTÉ radio, I picked up today’s card. I wondered how many different ways life might have possibly unfolded since that first student card and the days of Kate Bush in the charts.

Perhaps there is a multiverse where the first LSE card was sufficient to cover my time at its Houghton Street campus, where I reached the age of sixty-one in a different way. 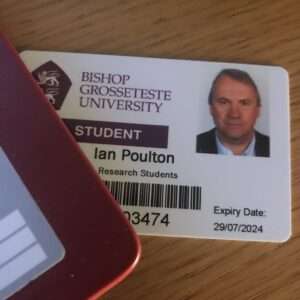