It is ten years this week since the Minitel system in France was switched off. It had been revolutionary in the 1980s when it had begun. Visitors to France probably only encountered France’s forerunner of the Internet at hotel receptions, or in the pictures of busty women pasted on roadside hoardings inviting interested persons to encounter them via a 3615 Minitel number.

It is odd now to think that Minitel was an icon of technology. The speed of change seems to increase.

A friend who died in 2004 would have talked of the century of communications history he had seen and would have regarded the end of Minitel as just a further step of progress.

Born in 1899, Alan would tell stories from his childhood years at the cable station at Valentia Island, Co Kerry.

‘There were two brothers who worked for the cable company. One was on Valentia and the other was in Heart’s Content, Newfoundland; at night when things were quiet, they would send messages to each other’.

It was a story that had a touch of the mythical, but the idea of a cable under the ocean must have seemed mythical in such times, as mythical as Minitel must have seemed in 1982. A system offering visual information to every household via a humble telephone line must have seemed from the realm of science fiction in 1982.

It is twenty-five years since I first went online. In February 1997, the email address was 106522.740 at compuserve dot com. It’s hard now to imagine life in the decades before electronic communication. Did people write lengthy letters? They hardly phoned each other all the time; phone calls were expensive.

In the thirty year lifespan of Minitel, the world changed and people began to forget what went before.

Anyone who visited in France in the 1980s will recall the payphones – dialling ’19’ for an international line, before dialling the code for the country and the person’s number and standing ready to feed the machine 50 centime and one franc coins when the call was answered.

It was 1995 before we took a mobile phone to France. The memory lingers of standing at a roadside outside of Le Havre on a fine August evening talking to someone in Northern Ireland. There was a sense of being at the cutting edge!

At the forefront of technology in 1982, Minitel was a disincentive to French take up of the Internet, at the time of its demise there were still 600,000 Minitel users, but France has rapidly changed. The smartphone is everywhere.

The end of Minitel marked the end of a bold venture; a democratic venture in taking cutting edge communication into the lives of ordinary people. When it ended, among other things, there was no longer be an opportunity to contact a lady via 3615; their posters all disappeared. 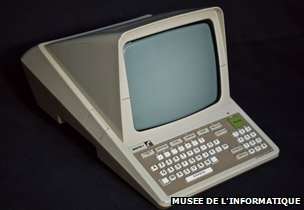