There was a colleague who used to tell a Chinese legend counselling caution about drawing conclusions.

There was a farmer who had only one horse, and one day the horse ran away. The farmer’s friends sympathised with him over his bad news. ‘It could be bad news, it could be good news, who knows?’ responded the farmer.

Sometime later, the horse came home – time bringing with it a group of beautiful wild horses.

The friends were delighted at the farmer’s good fortune and said to him how pleased they were at the good news. ‘It could be good news, it could be bad news, who knows?’ he said.

The farmer’s son was riding of the horses and fell and broke his leg. The friends were upset at such bad news. The farmer said, ‘It could be bad news, it could be good news, who knows?’ he shrugged.

A war came, and every young man was called up and sent into battle. Only the farmer’s son, because he had a broken leg, was left at home.

The friends felt the farmer would be glad of the way things had turned out. ‘It could be good news, it could be bad news, who knows?’ said the farmer.

How does one call things, even in retrospect? It is ten years since a September Saturday morning journey caused a pondering of whether something was bad news or good news.

Getting into her car in the French village of Ascain, a Parisian lady was concerned that a car had parked closely beside her. Turning around to try to see better, she pressed the accelerator instead of the brake of the car with her foot. The car shot backwards across the road, smashing a Volkswagen before bouncing off a wall on the opposite side of the road. Before hitting the Volkswagen, her car ripped the front off the silver Opel in which we were travelling.

Bad news? It seemed so at the time.

Friends who had flown from Ireland for just two days were with us; we had a great day out planned. Now we had a wrecked car which had to be collected; a taxi to wait for; a replacement car to collect; paperwork to complete. Our day was lost.

But couldn’t it have been good news?

What if we had been a fraction of a second earlier? Instead of shooting across the road, the car would have hit us broadside, and propelled us across the road into other parked cars.

It was not an experience one would ever wish to repeat, but one infinitely better than broken limbs or worse. 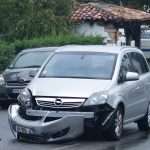