The 1958 Munich air crash was relived in a BBC television drama documentary last night. It was one of those dramas where you knew exactly what would happen and yet you wished for a different outcome.

Why did they get back onto the plane when it had already failed twice to take off? Why didn’t someone check the runway before the final tragic attempt was made?

The parts were well played; you shed tears with Jimmy Murphy, the Manchester United assistant manager as he stood at the bedside of Duncan Edwards; you wished that Edwards, the 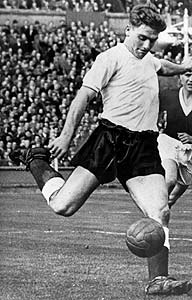 finest footballer of a generation, would get better. You knew the outcomes, the story has been told so many times in the intervening five decades, and yet you watched and wished that somehow the story would change.

There have been hundreds, thousands of disasters around the world since that afternoon in February 1958, disasters of magnitudes that dwarf the loss of twenty-three lives at Munich airport. What was it that was so gripping about the story last night?

Perhaps it was because it was dramatized, you lived through each fateful moment with the people there; you shared the banter, and then the apprehension and then the fear, you followed each second of progress as the BEA charter flight made its last disastrous journey down the runway.

The real power of the story was that it was personal; it wasn’t about statistics or unknown names, it was about flesh and blood, living, real people. It gripped because these were people you felt you knew and whose feelings you shared.

If the BBC can so grip people with a story that took place before even I was born, then the institutional Church needs to learn a lesson; people don’t warm to statements or documents, they are not excited by conferences or synods, they don’t like being preached at or patronized, what people like is people.

The story of Jesus is about a person who goes to people.