“There are no characters, anymore”.  The comment would have caused me great annoyance in times past, but maybe it is true.  Maybe in a uniform, globalized world we have become uniform globalized people.

I met a South African Catholic priest last month, he was full of stories and jokes and laughter.  He was a character worthy of remembrance, perhaps in part because he was a break from the greyness of most of us who are clergy in these islands.  Maybe it’s not just the clergy, maybe in our bureaucratic world, we have all lost something of the colour and the variety and the character of people in times past. 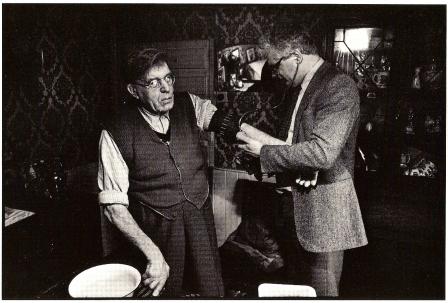 Flicking through “Wetlands“, Patrick Sutherland and Adam Nicolson’s 1986 book on life in the Somerset levels, I found a picture from the front parlour of our village pub, “The King’s Head.”  It’s a picture of the doctor, Michael Richards, holding his surgery.  There was no bus service from our village and if you had no car, there was no way of getting to the surgery in our local small town, so once a week the doctor would come to the village to hold a surgery.

The doctors were “characters”, even if they were dry.  Anyone who comes and conducts a medical surgery in the pub is worthy of being remembered.  It is hard to imagine in the days of practice managers, and ‘on call’ services, that any doctor would consider a  pub a proper place for medical practice.  I have no doubt that medical care is best provided in appropriate facilities, but the Wednesday afternoon surgeries in the village did say something about regard for individuals.

In fact, most people who are remembered as “characters” have gained that status because they were people who were not very efficient and not very conventional and not worrying too much about what people said; they are remembered because they had great regard for individuals.  Whether it was the old priest on his big black, iron pushbike, or in his clapped out old car, going around the parish to visit the elderly housebound; or it was the country doctor with tweed jacket and leather bag making housecalls on a Sunday morning; or the small town solicitor doing work for people knowing that there would never be any prospect of any fee; characters were people people.

There is no reason why there cannot be characters anymore, except perhaps the fear of being different.