“Who of you is left who saw this house in its former glory?” Haggai 2:2

Kneeling in church in my home village after the service on the first Sunday in August, I read the details of one of the war memorial tablets on the church wall. I must have seen it many times, but its oddity had never struck me before.

Perhaps the memorial struck more forcibly because I realized that day was the 90th anniversary of James Mead’s death.

It concludes, very sadly: Loved and only children of Robert and Florence Mead, of Low Ham.

It seemed odd that the younger son who had died a week earlier should have been recorded second on the memorial. One of the great matriarchs of the village, a lady whom I have admired since my youngest days, was at the service, “Joy”, I asked, “do you remember the Meads?”

“Ian,” she said, “I am not that old, but I will tell you the story of that memorial. My father told it to me. They were holding a memorial service for James when a telegram arrived to tell them that Champion had been killed a week before James had died.”

It is impossible to imagine the pain felt by that quiet farming couple, both at that moment and in the years that followed. Neither son was married and there was no-one to carry on the family name, no-one to work the family farm.

I wondered if anyone has ever written down the story Joy told me; if future generations will ever know of the sadness of the Meads. Will future generations ever hear of the telegram coming across the village green from the post office, bringing the worst news anyone could hear? 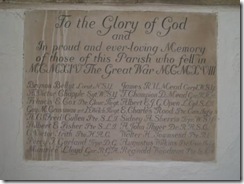 Remembering is at the heart of Biblical faith. The prophet Haggai asks a question of the Jewish people, who is there left who remembers?

To the Jewish people, history was sacred. It wasn’t just the writing down of a series of events, it was the story of God’s love and God’s care for his people. Haggai asks the people of his time if they remember the great days of the Temple, if they remember a very important time in the history of Israel.

Haggai is writing around about 520 BC, about seventy years after Jerusalem had been captured and the Temple built by Solomon had been destroyed. “Who of you is left?” asks Haggai. There would have been very few. There were maybe a handful of very old people who could still remember the times that Haggai was talking about, but for most people, such times were long before they were born.

Haggai knows that there are only a few left who remember, but he also knows that remembrance of the past is vital to the life and faith of the Israelite people. Their faith, their identity as a people, depended on the story of their past, if that story was forgotten, they would forget their faith and would forget who they were.

Why is remembering important? Maybe it’s fine for Haggai’s people to remember their past, why do we need to remember ours? Because in remembering there is healing, and in healing God is present and at work.

James and Champion Mead can be remembered in quietness and without controversy because the constant year by year remembrance of those awful years in the history of Europe has allowed every issue and every argument to be explored and to be worked through. The cemeteries of Belgium and Northern France are places of peace because remembrance has allowed a healing of memories. Remembrance has allowed those who remained to find comfort and closure. Remembrance helps us to try to find God, even in the darkest of human moments.

However, remembrance can also be disturbing and subversive. The constant recalling of the events of the Great War exposed the shortcomings of the British army. Perhaps it wasn’t as bad as the picture of lions led by donkeys, but there were serious questions about the way in which the army was led and the sort of society that leadership reflected. Perhaps there were people who would have preferred history to have remained firmly buried. History hidden away would have been much easier to live with than history revealed in all its rawness and ugliness.

Perhaps in Ireland there has been too much hidden history. The controversy that has flared up around the retelling of the story of the atrocities committed against the Cooneyites in 1921, shows that there are some people who want aspects of our history very deeply buried. They want the past left where it is, they do not want the discomfort of such events being brought to remembrance. Yet without remembrance, there can be no healing. Reconciliation is only possible when everyone feels that their own history and their own pain has been acknowledged.