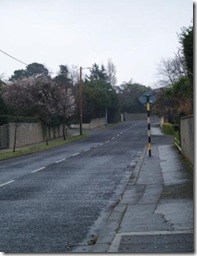 This is our road.

It is the middle of the day.

There is perhaps a car every few minutes. Once I saw three cars together. 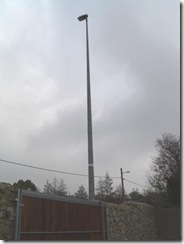 This is the street light at our back gate – it is maybe forty feet high. It is so bright at night that I can stand outside and read astronomy books.

There are hundreds and thousands of these lights all around. They burn all night. Were I to decide to read the Irish Times in the garden at 3 am, it would not be a problem.

If the government believed that things like turning off lights would stem the tide of climate change, this streetlight, and most of its companions would be in darkness.

What is the point of the Power of One campaign when the whole of Dublin is a great glow in the sky, and when the roads are gridlocked with traffic, and when, even with falling property prices, the city sprawls ever outwards? It’s a piece of tokenism, a salving of the consciences of those who feel we ought to do something. Have the Green Party ministers given up their ministerial cars? I was told by a Fianna Fail TD that even when they are filmed arriving on bicycles, their special branch officer is following in the car; is this so? Why do they make the pretence of cycling if there is a car anyway? The level of humbug is high: Ireland takes principled stands against nuclear power, while having an electricity interconnector with Northern Ireland, which has an interconnector with Scotland, which is, of course, part of a National Grid into which is fed electricity from nuclear power stations.

The Genesis reading about Adam and Eve and the serpent and the fruit was read in church last Sunday, a tale of the human drive to consume. If consumption is deep within human nature, no Green Party policies are going to change things.

If we want to save the world, we have to find a selfish way of doing so. It has to be in people’s own immediate self interest to find different ways of doing things. Government campaigns are about as useful as me standing in the pulpit and telling people they shouldn’t sin, they might be right and correct and truthful, but they are not likely to change anything.