“The British government is considering banning all Zimbabwean sports people from competing in the United Kingdom”, according to the BBC last night. It might have considered something more pro-active. If Zimbabwe were the possessor of massive oil reserves, one might wonder if intelligence sources would suggest that it had developed weapons of mass destruction that would necessitate an invasion by coalition forces. As it is, it could barely afford the fuel for the trucks, let alone the weaponry.

Robert Mugabe is one of the most odious men on earth and his demise cannot come too soon for his suffering people. But if the British government has suddenly found its conscience and has a sincere belief in freedom, why not go to the website of Reporters sans Frontieres (RSF) and contemplate where else might be deserving of the attention focused on Zimbabwe?

What about China, which persists in its illegal occupation of Tibet and which has an appalling human rights record? What about Russia where Vladimir Putin has played musical chairs in the past week, putting in one of his own men as president while he steps down to the prime ministerial role?

Whenever it feels powerless, the EU threatens to crack down. But dictators aren’t naughty schoolchildren who can be brought back into line with a few sharp words. Uzbekistan’s all-powerful president, Islam Karimov, hardly flinches in the face of European sanctions. Any more than Zimbabwe’s Robert Mugabe fears the action taken against him. Freezing assets abroad, refusing visas and banning travel in Europe, inspection of exports and downgrading diplomatic ties have not budged either of these two rulers. Freedom of expression is in very bad shape in both countries. The few independent journalists there know they are alone and have long stopped counting on outside help. An international arms sales embargo on China has been in force since 1989 but this has not reduced the number of rights violations.

The spinelessness of some Western countries and big international institutions is damaging freedom of expression. They are all quick to condemn developing countries that have little strategic value, but things are different when it comes to Russian President Vladimir Putin or Chinese President Hu Jintao. Western heads of state put away their lawyer’s robes and become salesmen. Trade with China and Russia is so important that human rights are rarely on the agenda. Or else they are talked about informally in very general terms. The real or false indignation of the Chinese and Russian leaders has been enough to scare even those who make the strongest protests. Who still dares to talk about the Dalai Lama or praise Taiwanese democracy to President Hu’s face? German chancellor Angela Merkel. Just her. Who can withstand the icy look of President Putin in a discussion of rights in Chechnya or about the score of journalists murdered since he came to power?

If banning a handful of sports people is all that can be done to promote freedom in the world, then dictators can rest easily in their beds.

What colour is your country? 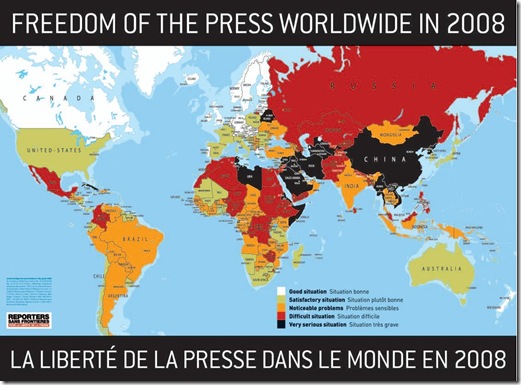