The RTE Gold signal kept breaking up on Tuesday evening. Switching to RTE Choice was serendipitous. At 9.30 pm Poland’s external radio service brought news in English – the President had vetoed a law that would have reduced the compulsory age for starting school from seven years old to six. At 10 pm American Public Radio came on – with good news.

Susan Lee, an economist, explained the significance of something called the Baltic Dry Index. Hardly earth shattering stuff, or is it?

If you’re looking for the first signs of a turnaround in the fortunes of the world, then they should come with the Baltic Dry Index. It’s not a market for speculators; you can’t order a ship to take goods from one corner of the world to the other in the hope that the following day you can sell the hire on to someone else to turn a quick profit. Ships are not like numbers on a computer or pieces of paper; they are very tangible, very costly, and very slow and steady in their progress.

The Baltic Dry Index fell calamitously at the end of 2008, losing something like 95% of its value as it dived from a high of 11,793 to below 700. But as Bloomberg’s chart shows, it has trebled since its low point: 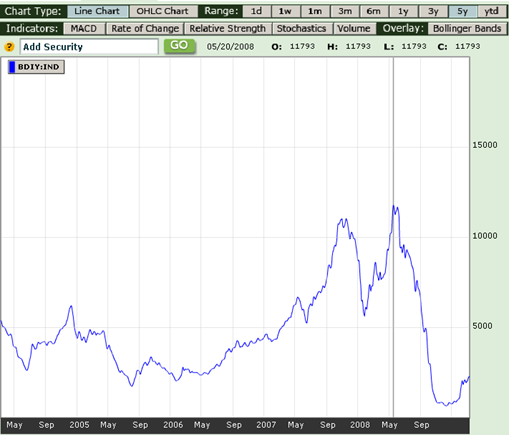 Could it be the beginning of a change in the fortunes of the world? Or is that just an irrational hope?

There is a long Biblical tradition of irrational hope. In 587 BC, as the city of Jerusalem is about to be overrun by the invading Babylonian army, the prophet Jeremiah buys a field. Not the action of a wise man in the face of the destruction of his country, but the action of a prophet wishing to instil hope in his people

I bought the field at Anathoth from my cousin Hanamel and weighed out for him seventeen shekels of silver. I signed and sealed the deed, had it witnessed, and weighed out the silver on the scales. I took the deed of purchase—the sealed copy containing the terms and conditions, as well as the unsealed copy- and I gave this deed to Baruch son of Neriah, the son of Mahseiah, in the presence of my cousin Hanamel and of the witnesses who had signed the deed and of all the Jews sitting in the courtyard of the guard.

Perhaps chartering a bulk carrier in 2009 would be the equivalent of buying a field twenty-six centuries ago. It would create quite a stir to stand at General Synod and request money for hiring a ship. Prophetic gestures are safe in the pages of the Bible, but an altogether different matter as a course of action.