Trying to decide on books to take to Africa in two weeks’ time is like a selection for Desert Island Discs. The battered Bible is automatic, but what else might be crammed into the bag? With lengthy waits between flights, and the ever present possibility of delays, short detective novels would not last long: sorry Inspector Maigret. Tolkien’s Lord of the Rings will be found space, but so also, probably, will James Joyce’s Ulysses. Wading through its 900-odd pages a few years ago seemed torturous at times, but, when far from home, its familiar sights and places will offer reassurance. The entire drama of the day it describes takes place within a few miles of here; many of the buildings and scenes remain little changed.

In an age of ‘celebrity’, Joyce is someone truly famous. ‘Bloomsday’, inspired by the day narrated in Ulysses is nine days’ time; it has become a major cultural event in Dublin, and is now marked in many other places, despite being set 105 years ago, and despite Joyce being dead for almost seven decades, and despite it being almost a century since Joyce even set foot in Dublin (he left in 1912, at the age of 30 and refused ever to return to Ireland).

The difference between the two seemed to get lost in last Tuesday’s English Independent. Reflecting on the experiences of Susan Boyle, columnist Deborah Orr wrote:

Much better to let the “fairy-tale” run, and let the whole world believe that Boyle’s sudden fame was a triumph of the extraordinary-ordinary, a home-spun comment on how obsessed the silly entertainment industry is with youth, glamour and surface, instead of sheer, raw talent.

But here’s the sting. Being exceptionally good at what you do is only a little part of the complicated business of being famous. That’s why so many people achieve fame without, seemingly, being terribly much good at anything . . .

You do have to be reasonably attractive to be in the public eye, especially if you are female. If you are not, it will be made an issue of, not just by the media but also by potential audiences.

If you have a very strong character, you may be able to withstand such criticism. A strong character can mean all sorts of things. But it helps to be single-minded, hard-working, determined, resourceful, willing to put up with disappointments, focused, confident, socially adept, charming, able to create an impression, manipulative, shrewd, opportunistic or able to identify and follow good advice.

The sub-editor responsible for the headline for the piece understood that the question was not one of ‘fame’; no talent show was going to create a figure who would be remembered for decades to come. The headline expressed the real issue, “Talent is never enough – you need grit to survive celebrity”. Rewrite the sentence, “so many people achieve fame without, seemingly, being terribly much good at anything”, as “so many people achieve celebrity without, seemingly, being terribly much good at anything,” and the column hits the mark.

The qualities demanded of a character of sufficient strength to cope with celebrity, including those of being “manipulative, shrewd, opportunistic”, may attract paparazzi pictures, what they do not achieve is true fame. 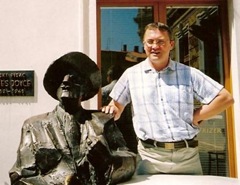 Encountering a statue of James Joyce is not an unfamiliar occurrence for someone living in Dublin, but what about encountering such a statue in a street in Pula in Croatia, where Joyce spent just five months as a teacher between 1904 and 1905?

When those who fill the pages of the glossy magazines merit commemoration in distant places where language and culture are different, but where genius that transcends national barriers is recognized, then they might be described as ‘famous’.