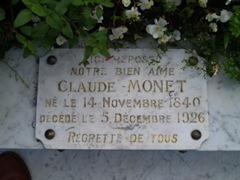 Visiting the French village of Giverny in the summer of 2006 in pursuit of Claude Monet, his grave came as a surprise. Close to the church wall in the little village graveyard, the artist, whose works now command tens of millions, had been laid to rest with his loved ones in the family plot. A little plaque, attached to the grave surround, the only testimony to his having been buried there. “Here lies our much loved Claude Monet, born 14th November 1840, died 5th December 1926, the regrets of all.”

It seemed a masterpiece of understatement. In his own lifetime, Monet was a major figure, a statue or monument would hardly have been ostentatious, yet a little marble plaque screwed to the stone suffices.

Monet’s work is sufficient monument to the genius who was laid to rest on the edge of that little village; all the same, such modesty is not too common in this world.

Monet came to mind in the Co Wicklow village of Enniskerry yesterday. Walking in the churchyard at the entrance to the Powerscourt estate, some of the graves had numbered signs that marked them out as part of a trail. The names were, for the most part, unfamiliar, but an almost illegible inscription on a stone that really would be properly described as a “lump of granite” read, “In loving memory Paul Henry RHA”; the gravestone of the man who for a generation was Ireland’s greatest artist. 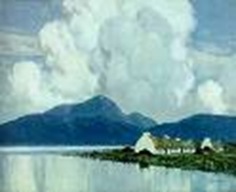 If a picture paints a thousand words, then Paul Henry’s were worth ten thousand. He captured the extravagant beauty of the West of Ireland; the meeting of land and sea and sky in constantly changing combinations of light and shadow. Henry’s characters shared the ruggedness of the country around; timeless figures involved in a lifelong struggle for survival on barren land and hostile seas. Henry paints profiles or rear views of people who are too engaged in the serious business of life itself to have time to pause for art.

Henry’s only memorial seems to be the granite headstone; as understated, in its own way, as Monet’s little plaque. Perhaps work like ‘Launching the Currach’, where imagination of the taste of the Atlantic spray on one’s lips and the shouts of the fishermen in one’s ears become almost tangible, are the only memorial needed, but there is a wish for something more. In a country dotted with religious and aristocratic statues, a few more artists and writers would not go amiss.

On top of the granite stone, a few smaller stones had been placed by visitors to the grave; as if starting the building of a cairn to mark the burial place of an ancient chieftain; as if recognizing that they wished to mark their own recognition of the man whose mortal remains lay beneath this Wicklow soil. In an age when ‘celebrity’ status is often so avidly sought, there is something almost Biblical in the modesty of Henry. 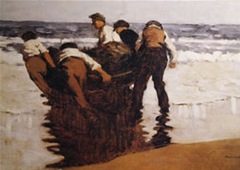