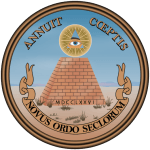 On the back of the American one dollar note there is a picture of the reverse side of the Great Seal of the United States. It was designed by William Barton, an artist in Philadelphia, in 1782. The seal has two mottoes, ‘Annuit Coeptis’, translated as ‘He has favoured our undertakings, and, beneath the illustration, ‘Novus Ordo Seclorum’, ‘a new order of ages’. The second motto is inspired by lines from Virgil, the classical Roman poet. Standing in the freshborn nation in 1782, it would have felt strongly as though a new order of ages had begun. 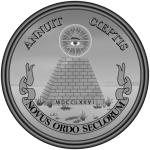 Barton’s ‘Novus Ordo Seclorum’ has been torn from its context, in times when Virgil would have been taught to schoolboys and where Latin would have been widely understood by those in the professions, and has been mistranslated by conspiracy theorists as meaning ‘New World Order’.’ It seems bizarre that a line inspired by classical poetry should be construed as a reference to an imaginary political grouping that is allegedly plotting to take over the world.

The misuse of historical references is not confined to those on the other side of the Atlantic.

Last week, Aodhán Ó Ríordáin, a member of Dail Eireann, had the temerity to suggest that because the chamber included people of differing religious views, including atheists, it would be appropriate in a republic that the daily prayer that opened the sitting might be replaced by a time of silent reflection. In an RTE radio interview, questions also arose about the playing of the Angelus bell at Noon and 6 pm by the national broadcaster.

The discussion prompted a listener to contact the station to maintain that Ireland was not a secular republic because the name of the Holy Trinity was invoked in the Preamble to the 1937 Constitution. It was a remarkable piece of logic, that words that are no part of any article of the Constitution should be the basis for maintaining particular religious practices. Looking at the Preamble, it would prove a fruitful basis for numerous viewpoints:

In the Name of the Most Holy Trinity, from Whom is all authority and to Whom, as our final end, all actions both of men and States must be referred,

We, the people of Éire,

Humbly acknowledging all our obligations to our Divine Lord, Jesus Christ, Who sustained our fathers through centuries of trial,

Gratefully remembering their heroic and unremitting struggle to regain the rightful independence of our Nation,

And seeking to promote the common good, with due observance of Prudence, Justice and Charity, so that the dignity and freedom of the individual may be assured, true social order attained, the unity of our country restored, and concord established with other nations,

Do hereby adopt, enact, and give to ourselves this Constitution.

Having claimed the constitution is in the name of the Holy Trinity, the Preamble presents history as centuries of trial in which Jesus was on the side of the Irish people culminating in the success of Irish nationalism and an anticipation of an end to Partition.

The Preamble offers a vision of Ireland where there is no place for the Unionists of Northern Ireland, and, if ‘true social order’ is an articulation of the vision of the government of the time, no place for dissenting voices or diverse lifestyles within the State. If our present and future were to be determined by reference to a past which exalted one tradition, then it would be bleak. The supposed New World Order offers more diversity than did the Ireland of 1937.

Just as the mottoes from the Great Seal are set in an historical context, isn’t it time that the Preamble was seen as marking a moment in a history that has moved far from the 1930s?