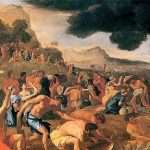 There is a cartoon that shows Moses standing on dry ground with walls of water on either side of him, waving at the people of Israel to follow and calling out, “What do you mean. ‘It’s a bit muddy?'”

In a humorous way, the cartoon captures Moses’ years of struggle with the Israelites. At every point in the story there seems to be discontent, no doubt there were some among the people who even, when they were fed, complained that they did not like quail or that the manna got stuck in their teeth. Grumbling seems second nature to some people.

The Israelite grumbling tradition is alive and well in the Church of Ireland. A colleague tells of a lovely harvest festival service in his church: the church was full, the singing was great, the harvest offering was large, but at the door afterwards, there were two women engaged in a heated argument. Was it something in the sermon? Was there some theological disagreement?

No, the row was because someone had arranged a vase of flowers and put it on one step at the front of the church and someone else had dared to move it down a step. Is this what the church is about? Had Moses heard the story would he not put his hand over his eyes and say, “Oh no, surely people are not still grumbling?”

There is a great deal of difference between disagreement, based on principle, and grumbling, based on? Well, it’s difficult to know what grumbling is based on.

I do not pray for the dead because I believe that once we move outside this world we move outside of time and that our encounter with God is immediate, I believe the departed do not need our prayers because if they are going to be with the Lord, then they are there already. Other people would disagree and find comfort in praying for their loved ones. Disagreement does not mean grumbling, it means an honest recognition of difference.

Grumbling is rooted not so much in what people think, not in strong positions they might hold, but in something more vague, something less specific. Grumbling is a state of mind rather than a clearly thought out attitude.

Why had the people of Israel left Egypt in the first place? Because of the misery and oppression they were suffering. Anyone with half a minute’s thought would have known that the grumbling was pointless; they had come to where they were because things had been so bad where they had been.

Grumbling comes not from conviction, but from a lack of conviction. Had there been a conviction about what they should be doing, they could have shared it with Moses, but there isn’t; all there is the state of mind that says, ‘I don’t like what I’m doing, but I’m not a person for doing anything, so I’m just going to moan about it’.

Grumbling stems from a lack of vision, from a lack of any sense of the big picture. The lady complaining about the vase being moved would have realized how absurd her complaint was if she had stopped for one moment to think about the big picture that harvest festival recalls. She would have seen herself as completely silly if she had had a vision of her church as the people of God trying to do his will, instead of, presumably, seeing it as a gathering of her small community.

Even Moses was afflicted with ‘vase watchers’. One of the greatest figures in the Bible, and even he cannot get people to look up and see the big picture. However, perhaps there is more the church might do to create a sense of vision and to take on the grumblers.

When a church reaches the point where people are arguing after church about a vase being moved from one step to another, then it is a sure sign that God has been forgotten. How could such matters even merit a mention if there was a vision of what the church was meant to be about? Had there been a real sense of thankfulness at God’s grace and generosity, there would have been no space for such a conversation, no time for such an argument if they had really been filled with a sense of wonder.

‘The whole community grumbled’, says Exodus. We all grumble at times; even clergy, especially clergy, grumble about daft things. When we find ourselves in complaining mood, we do well to remember that moment in Exodus when, after receiving so much, the people still complained. When there is a temptation to grumble, one question should be asked, ‘have we forgotten God?’ 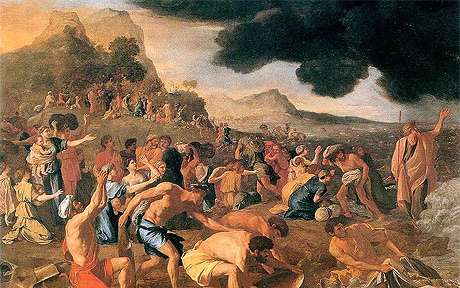