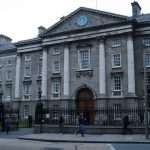 Having both children at the same university should be convenient, though the worlds they inhabit seem so far apart that one would wonder at times whether they were in the same city. One a fourth year computer engineer, the other a first year medic, their timetables are filled and their paths rarely cross, though one did say the other had phoned today.

Their both being there would have been a great source of conversation with the lady, a woman student there in the 1930s when women were a rare presence. Drinking tea one day, she had exclaimed, ‘Your son is at Trinity! I went to Trinity . . . I do wish my head was not so muddled . . . I enjoyed it there’.

The battle for lucidity had not so been so difficult that day. There seemed a consciousness of threads being lost, a willingness to allow silence, or perhaps just no longer an inclination to try to keep going. Like a pair of actors who had played out a scene on many occasions, the next line of the script provided the necessary prompt for the resumption of the dialogue.

We used to cover the same territory on each occasion, except that day there was some adaptation. There were new lines, memories triggered by some association.

‘He went away to England?’ It was one of my lines from previous performances.

‘Yes’. The response each time the question was asked; usually the end of a sequence, but, this time, new material.

‘That was what we didn’t want to happen. ‘Damn’, I thought.’

Thinking was probably as far as the word went, it was the early-1930s.

To have pressed the question would have crushed the butterfly-like fragility of the conversation. Sometimes names appeared, only to dissolve into nothingness as soon as one tried to create something of flesh and blood around the name.

There was laughter when we went over details of the school. Memories of Saturday evening dances to the music of a gramophone brought smiles.

The script was usually complete in about an hour. We drank tea and ate cake and looked out at the view.

A brilliant mind trapped in a twilight world where shadows can be substantial, or can be nothing at all; her recall of students standing in Front Square, as the campanile tolled the final moments before confrontation with examination papers, interrupted by pointing at some imagined object in a slate grey sky.

‘An engineer and a medical student?’ she might have smiled, ‘how exciting!’

Perhaps the day is not distant when a combination of research from the disciplines of computer engineering and medical science might ensure that memories of Front Square are never muddled and when the sound of the campanile is recalled with clarity. 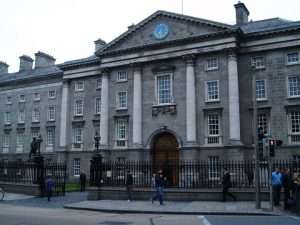