Augustus Toplady’s life encompassed the best, and aspects of the worst, of 18th Century Christianity. A man with a profound sense of God’s grace whose ministry touched the lives of countless people then and since, he became embroiled in a bitter controversy with John Wesley over their understanding of God’s plans for salvation; one of those controversies that is a matter of deep principle for the antagonists, but is beyond the comprehension of people outside the church.

Born at Farnham in Surrey in south-east England on 4th November 1740, Augustus Toplady was the son of Richard Toplady, a Royal Marines officer probably from Enniscorthy, Co Wexford. Richard Toplady had enlisted in 1739 and had risen to the rank of major; he had seen action in the Battle of Cartagena de Indias in May 1741, but later became ill and died, probably yellow fever.

It was in August 1755, that Toplady went to a religious gathering at a barn in Codymain, Co Wexford and heard a sermon preached by James Morris, a follower of John Wesley. Toplady’s relationship with Wesley was later to become so bitter that he denied Morris had any connection with Wesley. Toplady was to remember this sermon as the time at which he received his calling from God.

Toplady seems to have become embroiled at an early age in the controversies that divided 18th Century evangelical Christianity. Having heard God’s call through the preaching of a Methodist, in 1758, at the age of 18, he read Thomas Manton’s 17th Century sermon on John 17 and Jerome Zanchius’s Confession of the Christian Religion, which had been published in 1562. His reading convinced him that the Arminian views of the Methodists were wrong and that the Calvinists had a true understanding of God’s purposes.

Graduating from Trinity College in 1760, he returned to Westminster with his mother, where he met and was influenced by prominent Calvinists, including George Whitefield, John Gill, and William Romaine. John Gill wished that Toplady in 1760 would publish a translation of Zanchius’s work on predestination, Toplady commenting that “I was not then, however sufficiently delivered from the fear of man.”

Deciding to follow the path of ordained ministry, Augustus Toplady was ordained in the Diocese of Bath and Wells in 1762, serving as curate in the parish of Blagdon in the Mendip Hills in north Somerset. It was during this time that he wrote ‘Rock of Ages’, a local tradition claiming that the hymn was inspired by his need to take refuge during a thunderstorm in a cleft in the rocks in the gorge at Burrington Combe.

Ordained priest in 1764, Toplady returned to London before being licensed as curate of Farleigh Hungerford in Wiltshire for a little over a year, from 1764 to 1765. He then spent a year with friends in London

In May 1766, he was appointed to the parishes of Harpford and Venn Ottery in Devon. His ministry in Devon seems a time of blessing, this was what he wrote for the Sunday after Christmas, Sunday, 27th December, 1767.

‘In the morning read prayers and preached at Harpford, to a congregation tolerably large and very attentive. Afterwards administered the Lord’s Supper to some who appeared truly devout communicants. It was indeed an ordinance of love to my own soul. I experienced the favour and presence of God. I sat under his shadow with great delight, and his fruit was pleasant to my taste’.

But in 1768, he learned his appointment had come through a payment. He gave up the parishes, choosing instead to become vicar of Broadhembury in Devon, a post he would hold until his death. It was an appointment he regarded as blessed, ‘Thursday, 21st April. Riding home tonight from Exeter the Lord was with me in a way of spiritual communion. Applying to him for a blessing on my intended removal to Broadhembury this answer was given, ‘Go and I will be with thee’ and a little while after, ‘Thou shalt shake off every weight.’

It was after his appointment at Broadhembury that Toplady became involved in religious controversy. Six students had been expelled from Oxford because of their evangelical views and Toplady wrote a book arguing that the Calvinist line taken by the students had been the historical position of the Church of England. Preaching on Psalm 115 he was bitter in his attack on the Arminian views that would have been held by the Methodists, ‘Very different is the idea which Scripture gives us, of the ever-blessed God, from that of those false gods worshipped by the heathens; and from that degrading representation of the true God, which Arminianism would palm upon mankind. “Our God [says this Psalm, verse the third] is in the heavens: He hath done whatsoever He hath pleased.” This is not the Arminian idea of God: for our free-willers and our chance-mongers tell us, that God does not do whatsoever He pleases; that there are a great number of things, which God wishes to do, and tugs and strives to do, and yet cannot bring to pass: they tell us’.

In 1769, Toplady published the work of Zanchius on predestination that he had translated in his student days, it was part of a rancorous exchange of letters and pamphlets between he and John Wesley, in which Wesley was as open to reproach as Toplady.

The debates of two-and-a-half centuries ago seem strange to us today and it can only be felt a great pity that two great evangelical Christians should have regarded each other with such bitterness. Wesley wrote on 24th June 1770, ‘I do not fight with chimney-sweepers. He is too dirty a writer for me to meddle with. I should only foul my fingers’.

Toplady was an exceptionally gifted man, writing on many subjects, particularly on natural history. He wrote and spoke strongly for animal welfare, speaking in one debate on the subject of ‘Whether unnecessary cruelty to the brute creation is not criminal?’ His health began to fail in 1775, when he was still only 35 and he was granted leave of absence from his Devon parish.

Augustus Toplady spent of the remaining three years of his life in London, preaching regularly in a French Calvinist chapel right up until the weeks prior to his death, sermons that made it clear that he had forsaken none of his beliefs in predestination despite the claim of John Wesley that he had made a deathbed renunciation of his Calvinist views. Even after Toplady’s death the controversy continued, Wesley’s claim that Toplady had died mad and shouting blasphemies being rebutted by Toplady’s friends

Augustus Toplady died of tuberculosis on 11 August 1778., three months short of his thirty-eighth birthday. He was buried at Whitefield’s Tabernacle, Tottenham Court Road.

Toplady and Wesley are men worthy of admiration; it is sad in retrospect that energies that might have been spent in ministering to the great spiritual needs of 18th Century England were devoted to a theological argument to which God himself can only give the conclusive answer.

Toplady’s great gift to succeeding generations was not his work on theological controversy, but the profound truths of his hymn, ‘Rock of ages’. Two lines of the final verse capture a sense of where we shall find those answers which he sought, ‘when I soar through tracts unknown, see thee on thy judgment throne’. May we remember all that was best in his life and give thanks for such a faith. 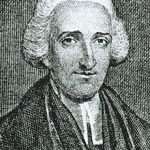