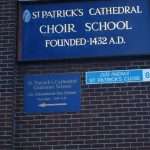 Travelling north on the M9 motorway in Co Carlow, there is a moment when infrastructure and landscape match those in a part of rural France; an unremarkable stretch of autoroute through an unknown département, yet one lodged deep in the recesses of the brain as emblematic of holidays deep in the French countryside. Memories of an atmosphere, a mood of well-being, have the capacity to transform the bland uniformity of concrete and tarmacadam.

Soon after being appointed to a Dublin parish in late-1998, there was a journey south to make practical arrangements. Going to Dun Laoghaire, the view over Dublin Bay from the top of the car park momentarily encapsulated the optimism, the changed perspectives, of those days. Many times in the years that followed, I would drive to that same spot in the car park and stand and stare out to sea and, sometimes, recapture a fraction of the feeling of those times.

There are moments that can cast a light on everything around. Perhaps for a few seconds the mundane and the dull are transformed; they seem different not through any quality of their own, but through the context in which they have been set. Such moments are rare enough.

On 2nd December 1985, I remember going to Saint Patrick’s Cathedral in Dublin for the Advent carol service. It was a fine afternoon; the last beams of a watery, winter sun shone through the windows and, as the light died, the air was cut by the voice of a boy chorister. The service was an occasion of astonishing beauty, a moment when we were gathered up from our workaday, worldly existence and taken up to a higher plane. The Irish Times the next day reported that the service was such that even the darkest and dimmest parts of the city seemed to be filled with light. The city had not changed, but, for a moment, was set in a different context.

Sitting in that same cathedral more than a quarter of a century later, Benjamin Britten’s ‘Ceremony of Carols’ was sung to mark Candlemas. The sublime sound of the choristers and the girls’ choir filled every recess of the vast building; the harp accompaniment brought one close to the Sixteenth Century sources of Britten’s music; closing the eyes, January 2012 slipped out of sight. For a moment, the world was changed.

Walking down Kevin Street, the cold rain fell relentlessly. No-one would venture beyond their front door without good reason. Sporadic traffic sent forth jets of spray as it sped through surface water. A day more grey would be difficult to imagine, yet beyond the rainfall the ‘Alleluia’ of treble voices still echoed through the mind. 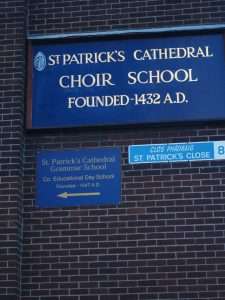