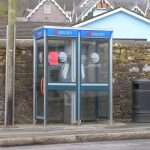 There is an ’01’ telephone directory in the bedsit that is accommodation close to the cathedral for the next couple of days. Perhaps it is felt by cathedral staff that canons in residence may wish to catch up with old friends in Dublin, or phone out for a pizza.

The very idea of a printed telephone directory may become an anachronism as everything is moved online. It is hard to imagine how the directory inquiry companies make any money when the entire Eircom directory can be searched with the tap of a couple of keys. Why would anyone pay for something that is free?

It is not just the numbers that come for free – more and more, it is the calls as well. A journalist phoned from New York last night; we talked for half an hour. The conversation concluded not through fear of the cost, but because there was an appointment that had to be kept.

Visiting the Philippines twenty years ago, a three minute telephone call to Northern Ireland had to be connected through the operator, and cost 300 Pesos, a sum then equivalent to £6 Sterling; returning ten years later, mobile phone calls home were about £5 an hour. Being at college in Dublin in the early-80s, a call to Co Down, less than a hundred miles away was 80 pence for three minutes; it is a call that is now free on many subscription packages.

It is progress that would have been viewed with delight by Alan, who died in 2004 and who told many stories from his childhood years at the cable station at Valentia. ‘There were two brothers who worked for the cable company. One was on Valentia and the other was in Heart’s Content, Newfoundland; at night when things were quiet, they would send messages to each other’. It was a story that had a touch of the mythical, but sounded fun.

It was the cost of calls that most perplexed him. ‘Do you know how much a telephone call across the Atlantic cost when they began? Fifteen pounds!’ Ten weeks pay for a labouring man; thirty weeks of the old age pension; it was beyond the imagination of most people that someone should phone America.

A hundred years on, it is hard to imagine a world without instant communication. In twenty years time, a child will pick up a dusty telephone directory and be astonished at the quaintness of putting numbers in a book. 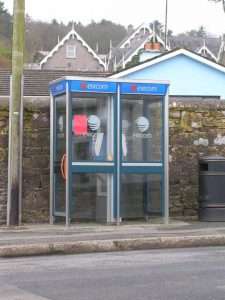