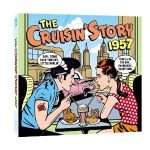 It was the album cover that caught the eye, a cartoon depiction of a young couple sitting at a booth in a diner. Buying ‘The Cruisin’ Story 1957,’ fifty tracks of American music from Buddy Holly, Chuck Berry, The Everly Brothers, Sam Cooke, Little Richard, Elvis Presley and a string of others: childhood memories surfaced of how rich Americans had always seemed when compared with pictures of post-war Europe.

The diner seemed to epitomize that age of optimism. There was nothing in Britain to match the brightness and the brashness of the American eating place. The traditional British café, with its menu of fish and chips and a pot of tea, had none of the glamour and excitement that seemed to imbue the chrome, glass and plastic of the diners.

Even Americans seem to perceive that period as a golden age; the chain of Lori’s Diners in San Francisco are fitted out in retro 1950s decor and reproduction artifacts. Not only are the interiors reproduced, there is a recovery of the atmosphere: good service, good food and good prices. Lori’s is the only place where I have seen people queueing in the street to wait for a table in order to have breakfast on a Sunday morning.

The diner seemed to capture a sense of the best values of small town America: community and courtesy and companionship. In Garrison Keillor’s descriptions of 21st Century Lake Wobegon, his fictional town out on the edge of the Prairies in Minnesota, the Chatterbox Café, the local diner, is still at the heart of the life of the town.

To English eyes looking from across the Atlantic, the diner stood for more than small town values; it was a reminder of the things Americans had that we lacked.

They had money. They wore clothes that made ours look drab, and they had plenty of them. They drove massive, extravagant, overstated cars; loud colours and tailfins, chrome and bright lights. Their houses were spacious, with refrigerators you could hide in and kitchens that lacked nothing you could imagine.

More than money, they seemed to have a sophistication which was absent from the England depicted on our two television channels where ‘Coronation Street’ seemed an expression of national life.

Of course, the appearance were deceptive and the realities very different. Nevertheless, the Americans were, and remain, far better at optimism and exuberance, not such bad qualities with which to approach daily life. 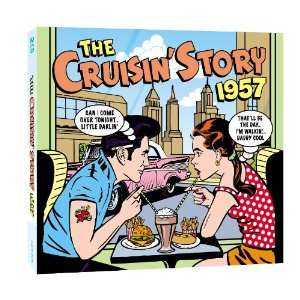