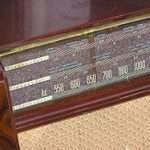 The words across the dial were unknown places. Tuning to each in succession, there was little enlightenment: the fizz of static, the rise and fall of sound from the AM signals coming through the night air. Luxembourg and Athlone might be comprehended but the voices from elsewhere remained a mystery; the stations as alien and as distant as life on another planet.

Van Morrison’s ‘In the days before rock and roll’, captures the intensity of those radio moments:

I am down on my knees
At those wireless knobs
Telefunken, Telefunken
And I’m searching for
Luxembourg, Luxembourg,
Athlone, Budapest, AFN,
Hilversum, Helvetia
In the days before rock ‘n’ roll

It was not just the disembodied voices speaking unknown languages; it was the physical infrastructure of radio that could create a mood almost sinister. Perhaps it was the sight of lines and lines of masts during childhood days, built to listen to signals from who knows where. Perhaps it was pictures of the listening stations at Goonhilly Downs; the name itself enough to strike uncertainty into a youthful mind.

Radio was not reassuring in the way that television could be, it was remote and impersonal and almost intimidating. Television always came from somewhere known, somewhere identifiable; in Somerset it was from London or Bristol or Plymouth. Radio was altogether more anonymous; it could be local, or it could be somewhere on the other side of the world bouncing a short wave signal around the planet. During Communist days, Radio Moscow used to broadcast to England with its own very distinctive view of the world.

It was more than station location, foreign languages and the dark silhouette of transmitter masts; radio might play a role very different from that of television, a role that might prompt fear, whatever one’s age. Many of the masts and the dishes dotted across England were not there for entertainment; they were there for intelligence purposes. They were there to listen for the ever present threat of attack by the Warsaw Bloc; they were there to warn us that nuclear destruction was imminent. Perhaps it was the association of radio with the threat of being blown to kingdom come that could give radio its darkly menacing quality.

Budapest, AFN, Hilversum, Helvetia – perhaps they offered reassurance as well as an air of mystery, as long as they were on air, as long as those distant voices continued talking, as long as the sound of programmes came and went in the nocturnal ether, then things could not all be bad; the masts had not told tales of impending doom. Turning the dial invited thoughts of fearfulness, but also hopes that all might well with the world.