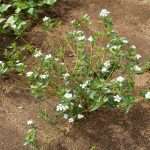 Sitting outside in the warmth of an African day, there were a few moments in the middle of the itinerary just to be still and to think. Sometimes such journeys can pass like a documentary being watched on television, the sights and sounds being as distant as images beamed in by satellite; sometimes there is a sense of not connecting with the reality around, or maybe not wanting to connect with it.

Although the rainy season, the heat of the day had dried the red soil beneath my feet. There is always something about soil that creates a sense of connectivity, perhaps it is that there can be nothing more real than the ground on which one stands. The late Pope John Paul II during the times he travelled the world would make a point of kissing the ground on arrival at a place, as well as being a profound gesture of affirmation, it was a connection with what was actual, real and corporal in the place he visited.

The red African soil has a special quality – a reminder of the huge potential of the country in which one stood and a reminder that in the midst of potential abundance there is unnecessary want and suffering.

The soil filled the thoughts until I noticed something strange. On the ground in front of my chair, imprinted in the dust, there was the image of a church tower standing on a hilltop – an image with which I had grown up, Glastonbury Tor.

Rubbing my eyes to ensure that the image was not an hallucination. I lifted my left foot, crossing my leg over my right knee in order to be able to see more clearly. It was taking my foot in my right hand that caused me to realize that the sole of the shoe was not smooth – an image was set into it, the Tor, the familiar trademark of Clark’s Shoes.

There was a sense of disappointment – Glastonbury Tor had not appeared in the soil of mid-Africa, the sense of reassurance that came with the childhood image was dispelled.

Perhaps it is such desire that lies at the root of many of the world’s problems, the wish to find what one wants in a place; even worse, the wish that one’s own desired images be imposed, no matter how alien they are to the place concerned.

Connection with a place demands much more than standing in it.