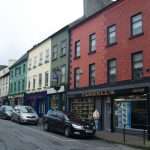 Not so many years ago, a journey across Ireland would have been filled with variety, unexpected moments, a sense of having travelled somewhere; even if, by the standards of the wider world, the distances were trivial. A journey from Ulster to Cork or Kerry might have involved an overnight stop; to average forty miles per hour was an achievement. To have attempted at driving at speeds much greater in much of rural Ireland would have been to invite the loss of the sump of one’s car when hitting a pothole or a ramp (as happened to a colleague one Sunday night thirty years ago when driving from Belfast to Dublin).

The journey wasn’t just about the roads driven, it was about the towns in which one stopped.

Nineteenth century streets half a mile wide where the cars would be triple parked and still there would be space for through traffic. Cafeterias where tea would be served in aluminium teapots and the menu was concerned with what you had served with your potatoes. Shops where rosary beads and holy pictures might occupy window space with veterinary medicines and fancy goods. Churches to which the removal of the deceased on the eve of the funeral would bring crowds of hundreds to shuffle behind the coffin and to queue to grasp the hands of the bereaved. Drab school uniforms stifling the youth they enclosed. Women with steps of stairs offspring; flat capped men in jackets and dark flannels. Pub signs outside alternate premises, at least one of which would double as the undertaker’s premises.

Perhaps somewhere out there such towns may still be found. Perhaps the Ireland through which we used to make slow progress still endures in the less accessible parts of Connacht or Munster, or in some spot deep in the Midlands, but the economic boom that transformed most towns also created motorways that bypassed them, making for journeys that are now swift (Kilkenny to Belfast in three hours), but also boring.

In a parish sixty miles from Dublin, many of the older members regard the capital as some distant place, a journey to which demands some considerable effort and, in times past, one which would only have been contemplated for particular reasons. Being able to work until five o’clock on a Saturday and then get in the car and drive the motorway up to the city for an evening rugby match is something regarded by some as eccentric; my explanation that it takes only an hour and a quarter to reach the ground is sometimes treated with an unvoiced scepticism. If one’s memories are of the old Ireland, then such a journey seems unlikely.

Ireland has shrunk, but with it there is a sense of loss. Perhaps the land of teapots and potatoes was far from idyllic; but it possessed a quality of community life that has been lost in our transience and rootlessness.