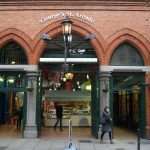 Perhaps HMV were agents of their own demise – they were not sure what they were about, where they might find their place in the market. The music they played in their stores seemed the sort of music that people would download and play on their personal audio systems rather than the sort which people bought on discs that were purchased over the counter. Their shelves seemed to have more by way of DVDs and computer games in many formats than the sort of recorded music through which people would have once browsed, reading the cover notes of albums. Yet their disappearance means one more opportunity of interaction with flesh and blood human beings is lost.

There was a stall in a Dublin arcade where I would regularly have bought second hand CDs. On one occasion, when I was clerically dressed, the stallholder picked up the discs I had placed on the counter and said, ‘Now, what does a man of faith listen to?’

‘A bit before your time’. I had said. He had looked no more than thirty. The stall reappeared in the basement of another shop, but when I went there, the man was gone, now I would never discover what he might like when he was forty.

Maybe it doesn’t matter if one more record seller has disappeared, but maybe it does. It’s about more than a record store, whether that store be HMV or a stall in an arcade.

In twenty or thirty years time, where will people go for the experience of actually touching things? Will no-one ever pick up an album and admire the artwork and read the track list? In a world where music is purchased in online downloads and where records have no tangible existence, where will one go for that moment of serendipitous delight in finding Creedence Clearwater Revival, or whatever band it is that strikes a personal chord? Will an activity that once bonded people together – particularly teenage boys – be lost and gone forever?

The shops which brought many of us most delight, record shops, bookshops, are disappearing, squeezed by the power of the online retailers and our propensity to reduce life to an individual experience.

Life is moving from the actual to the virtual. The Internet is reducing experience to a series of digital interactions; the concrete, the tactile, the human, the things that make human life what it is, are being lost.

His Master’s Voice is being replaced by no-one’s voice – simply the tapping of a keyboard and the click of a mouse.