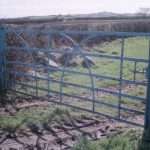 The road would have been easy to miss, tucked into a fold in the hills to the north of Co Down. No more than ten miles east of Belfast, in a strip of open country between two large dormitory towns, it seemed an unlikely spot – as if one had been caught up in a C.S. Lewis story and had stepped from a familiar place to somewhere altogether different. Even the name was odd, ‘Mountain Road’; there was nothing remotely like a mountain for miles.

A side road off a minor road, it wound its way by a number of suburban houses and, part way along on the right-hand side, there was a lane leading to a small farmhouse. A quiet man, the farmer stood in the yard and greeted me, his accent immediately noticeable as very different from the Ulster Scots tones of those who lived around.

‘You’re not from these parts?’

There was a sadness in his voice, a melancholy that evoked visions of thatched cottages with turf fires, of soft spoken people and gentle rain.

At least a quarter of a century ago, the moment still lingers in the mind; the man’s name is long since forgotten, but the soft tones of his rural Leinster voice remain. Perhaps the meeting with him prompted thoughts about another Ireland being possible beyond that parish of drums and bunting; perhaps there was a sense that his presence there signified that he was a permanent exile from his homeland.

The beaters of drums would have said the farmer’s presence in their community was evidence of their need to continue to beat their drums; that there was no place for Protestants ‘down South’. Maybe there was a time when they would have had a point. Tales of what Ireland had been like under Archbishop of Dublin John Charles McQuaid circulated freely among Loyalists. McQuaid had been fifteen years dead but the stories were still being told like threats of a bogeyman who would get you unless you did as they said. Perhaps it was to escape the bogeyman that the farmer’s family had migrated northward.

Yet even in the late-80s, anyone with eyes to see knew that the times were changing. The old Ireland was disappearing, not through changes wrought by drum beaters, but by the economic development and social liberalism ushered in by the EEC. Money in people’s pockets was proving to have far more power than religious doctrines or political dogmas.

The oddest thing of all is that while the Protestant population of the Meathman’s adopted province has steadily fallen, that in the Irish Midlands has steadily risen. Perhaps there is something to be said for quietly getting on with one’s work. Perhaps the firm consonants of Ulster Scots will become more common among the soft vowels of Leinster farmlands.