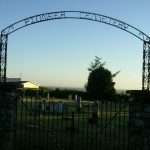 John Creedon last night played America’s ‘A horse with no name‘. It  evokes a place of vastness, a place of emptiness. A vast emptiness that allows space to be oneself, to remember one’s own name:

I’ve been through the desert on a horse with no name
It felt good to be out of the rain
In the desert you can remember your name
‘Cause there ain’t no one for to give you no pain.

‘No-one for to give you no pain’: it shares the sentiments of Lee Marvin’s ‘Wanderin’ Star.’ Pain comes from other people, freedom is being on the road.

Deserts might be uninviting, but the open road is filled with attraction. To be driving across the vastness of the United States, between one small town and another, staying in motels where they barely ask your name, eating in diners where farmers sit down to thirty-two ounce steaks and where, when the server says ‘have a nice day’, the words might actually be meant: such a prospect would be pleasing. To be coming from nowhere and heading toward nowhere, the only thing mattering being the journeying: it wouldn’t be such a bad thing.

To be no more than a person journeying through brings freedom, it also brings one the infinite power of powerlessness. It’s the line from Kris Kristofferson’s ‘Me and Bobby McGee’, ‘Freedom’s just another word for nothing left to lose’. To be someone without a place, without standing, to be no more than a casual passer by, allows one the unfettered freedom to speak the truth, to call things as they are, to name hypocrisy and ask for integrity.

Of course, no-one may be listening, but what problem? At least you have remembered your name, remembered the person you were.

Christians used to believe such stuff. Jesus of Nazareth went off into the wilderness for forty days to remember his name, to reflect on the person he was called to be. He called his disciples to a life on the road, to be people who had nothing to lose by calling things as they were. Christians used to be about integrity, but then the church came along and that stuff disappeared. It’s hard to imagine the First Century itinerant preacher intended that things would turn out as they did. Did he really intend his followers to cause as much pain as they did?

Sometimes there seems more truth in the lyrics of forty year old rock songs than in the pronouncements of those who purport to possess absolute truth.