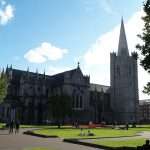 In the summer of 1988 we went camping at Messanges in south-west France. We try to go to church on a Sunday, wherever we are and whatever the tradition of the church might be, and so it was that we found ourselves attending one of the strangest church services I have ever seen.

The area is very popular with British holidaymakers and one where Anglican clergy used to provide holiday chaplaincies in various places. In Messanges the Anglican services were usually held in the local Catholic Church, but it was being restored and the Catholic congregation were going to Mass elsewhere.

The chaplain had inquired about the use of a restaurant at the entrance to a huge campsite, but this had been refused. The restaurant owner did however say that his car park could be used for services. The chaplain had managed to get a few chairs and benches from here and there and had arranged them in the middle of this car park. You had to admire the man’s faith.

By the time the service was due to start, there was a reasonable congregation. Forty or fifty people were sitting in the semi-circle, which wasn’t bad for the middle of a car park, with hundreds of people passing by heading for the beach or heading to the shops, and a temperature of 33 degrees Celsius.

The appointed hour of 11 o’clock arrived and the chaplain appeared from the back of a minibus, in full clerical robes – cassock, surplice, preaching scarf. ‘This is absurd’, I thought, ‘Everyone will think we are mad’.

I couldn’t but admire the confidence of the man at the front, ha had started from nothing and had now a congregation standing in a car park singing hymns. The man next to me sang very loudly in a Belfast accent, ‘Well they would be used to standing in odd places singing hymns’, I thought.

When it came to the sermon, the chaplain decided to tell the story of the healing of the paralysed man who had been lowered through the roof. But instead of just telling the story, he decided to get children from the congregation to act it out. One boy lay on a blanket while four others got hold of a corner of the blanket each, lifted him up and carried him along. I must say I had doubts at this point, ‘Why am I sitting in a deck chair in a car park on a hot French August morning watching children carrying a boy in a blanket?’ If I had not already been lobster-coloured, I would probably have glowed with embarrassment.

The chaplain wasn’t the slightest bit embarrassed. He told the story and the children acted it out. He didn’t care if anyone thought he was eccentric, or even if they thought him completely mad. This was a story of what Jesus had done. This is what we believed; even if there were people like me who felt somewhat embarrassed by the group of onlookers who stood and stared at this strange group of people.

I don’t remember many sermons, but I remembered that one. In terms of Scriptural exposition or theological depth, it wasn’t even a very good sermon, but it was a sermon that came from the heart, a sermon springing from the man’s deep faith.

Some people seem blessed with a capacity for great faith; other people, like me, find faith a very difficult matter.

We’re told in the Gospel reading from Luke 8 that the disciples were crossing the lake with Jesus and, ‘As they sailed, he fell asleep. A squall came down on the lake, so that the boat was being swamped, and they were in great danger. The disciples went and woke him, saying, ‘Master, Master, we’re going to drown!’

These aren’t men who are spiritual superheroes. These are men who are ordinary and who are frightened; these are men who are like you and me. We can’t imagine these men who were so filled with the fear in the boat being prepared to stand up and preach in a public place, anymore than we can imagine doing so yourselves. But the God who was preached about by the chaplain at Messanges is a God who is in control.

What happens? Jesus ‘got up and rebuked the wind and the raging waters; the storm subsided, and all was calm. Then comes the telling question. ‘Where is your faith?’ he asked his disciples.

The disciples reaction is important. They ask themselves about their faith, ‘In fear and amazement they asked one another, ‘Who is this?’ It would not be then, but later, that they fully realised who Jesus was. It would be when he was raised from the dead and when the Holy Spirit came, that the disciples were blessed with the full faith for which Jesus was looking.

What about ourselves? Where is our faith? We’re never going to be in the boat with Jesus, but there are lots of other times when Jesus is looking for faith, when maybe he is disappointed at our lack of commitment. Faith can lead is in many directions, it might mean making more time for quietness and reflection; it might mean that we become more active and give up more of our time. Jesus’ question about where is our faith provokes an individual response in each of us, a response that we can only make for ourselves.