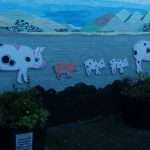 I never knew what Joe did, maybe he was a groundsman of some sort. Rarely to be seen in the daytime, he would appear at the evening meal in the small basement room where he and the three volunteer staff sat around a plain wooden table.

He claimed to be a devout Catholic, though his religious devotion seemed to consist mainly in a very peremptory sign of the cross before diving into his plate of food.

He never explained how he came to be working in the place, maybe the nuns had taken pity on him and had been prepared to give him board and lodging and a few pounds in his pocket in return for whatever work he did around the place. Joe was an Irishman in exile and had an uneasiness about him at times. He would wander off to the pub late at night, the orange glow of his cigarette visible as he walked down the lane. He seemed a solitary character, never seen in anyone’s company.

The parish priest was a genteel character. Each time he heard my West Country accent, he took me for Cornish and would proceed to talk about his annual holidays in Newquay. Perhaps he was as lonely as Joe seemed to be, though it was hard to imagine that their paths very often crossed. It was hard to imagine Joe would have gone to confess his sins to someone as refined as the smiling and avuncular priest, even if Joe had been inclined to go to confession.

Perhaps we should have made more effort to be friendly towards Joe, but he was not only from a different generation, he was from a different world. Listening to his stories, he appeared to have built every motorway across the length and breadth and England. If this were not enough of a lie, Joe’s accounts of his alleged conversations strained the patience of even the most credulous.

He claimed to be sitting in the basement room sharing his dinner with three teenagers because he could not come to terms with the head of one of the biggest construction companies in the country. ‘We were finishing off this stretch of motorway and they said they weren’t going to pay as much for the next job. So I says to them, ‘You don’t pay us what we’ve been getting and you won’t be having us working for you’. Then Sir Alfred himself comes in by helicopter and he comes up to me and he says, ‘Joe, I know you’re a straight man and I’m telling you I can’t afford to pay you what you’re getting now’. So I said that I couldn’t work for a quarter of what I was getting and I told him I was leaving.’

Perhaps we should have burst out laughing at that point – it might have defused the situation – but we sat evening after evening listening to Joe’s stories until one evening one of my companions, a guy over six feet tall, finally exploded. He stood up, took Joe by the lapels, and told him that we were tired of his stupid lies.

Joe took his meals by himself after that moment. It was a relief not to have to listen to his pointless deceit, but there is still a feeling years afterwards, that even as teenagers we might have handled the situation differently. How do you challenge dishonesty without alienating people? It would have been a useful skill to have had on many occasions since that mealtime row.