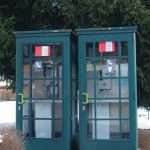 Do you remember the days of writing letters, counting words for telegrams, or feeding stacks of coins into a pay phone? The way some people complain, it would be easy to imagine that such modes of communication represented some idyllic golden age when being out of touch meant one could exist in perfect peace and contentment. To be incommunicado has now become a selling point; the possibility of someone establishing undesired contact seems now to have prompted people to seek destinations where they cannot be reached; the BBC reports on people taking a holiday from technology.

Anyone who travelled to France in the Eighties will remember how, in those pre-satellite broadcasting days, there was a genuine attempt to respond to the fact that hundreds of thousands of English-speaking people visited the country each summer and Radio France Inter would carry a news bulletin in English twice a day. In the north of the country, BBC Radio 4 was audible; further south, the World Service could be found at odd frequencies. They were times when emergency messages would still be broadcast, ‘would Mr John Smith travelling on the Riviera please phone home where his mother is very seriously ill’.

By the Nineties, those times were past. Our first holiday in France with a mobile phone was in 1995; calls were expensive, but feasible over much of the country. It seemed an age of innocence had passed.

Two decades on and only the sparsely places in the world are without coverage from mobile networks. To stand in central Africa and send a text to a friend in Co Laois is no more a problem than standing at the next farm and sending a text. Find a cafe or hotel with Wifi, and a phone call to that friend can cost nothing with Viber. The possibilities for making contact are endless. Why would anyone wish to complain about the possibility of cheap and easy communication?

If someone does not wish to be contacted – then phones and computers have an app which makes that possible, it’s called the ‘off’ button. To seek ‘technology free’ locations seems more about establishing a further marker of one’s affluence and importance than not wishing to talk to people.