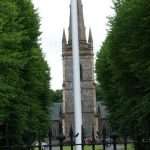 The sermon this afternoon was rubbish. A recalling of the traditions surrounding Saint Patrick and a suggestion we might try to be like him; nothing of any substance.

It was like being at a service thirty years ago, in a church in rural Ulster where an ageing clergyman was in the closing years of his ministry. ‘A dreadful preacher, a lady forthright in her opinions had said of him’, “I went there one Sunday evening to hear him preach and was very disappointed’.

It hadn’t been for me to comment. She was probably right. He would not have been satisfactory to the tradition to which she belonged. She would have expected the preacher to have opened the Bible and to have expounded upon the Scripture passage that had been read; the old canon didn’t do that. He could have done so if had wanted, he was a Hebrew scholar in the 1930s, but that wasn’t his style.

He had been more than thirty years in the parish and this was his last summer. He told stories. The more evangelical members of the congregation would have been frustrated at times that there was not more ‘meat’ in what he said, but they respected him as a prayerful and Godly man.

He preached one Sunday about the ‘beauty of holiness’ and about a little girl going to a church on the North Antrim coast during her summer holidays. It was a traditional, rural congregation in the 1940s and every woman wore a hat. The little girl ran from the church, back to where her family were staying, gathered her mother’s sun hat and reappeared at the church door, her face almost entire obscured by this huge hat. The canon believed that holiness was expressed in such innocence and purity of heart.

It was probably a dreadful sermon by any professional standards and even in the two summers I attended his church, he did have a habit of repeating what he said. Perhaps the lady’s criticism were valid, but I didn’t mind; I understood the stories, thirty years after his last summer, I remember the little girl in the big hat.

An African preacher whom I once interviewed for local radio launched into me, ‘People do not need silly stories, they need proper preaching’. His idea of proper of ‘proper preaching’ is reflected in the satellite television religious channels: the slick pastors in their sharp suits preaching in huge buildings to hundreds, if not thousands of enrapt listeners. Proper preaching would bring you such congregations.

The African preacher would have had no time for the old canon, he would have concurred with the forthright lady, a ‘dreadful preacher’. The old canon would probably not have said much in response, just smiled and gone on his way. I think of the canon in his old Renault going around the homes of his country parish; I think of his gentleness and humility, and his contentedness with being in the same place for decades. I hope I can one day find his degree of holiness and his degree of contentment, for my sermon this afternoon would undoubtedly have incurred the wrath of the forthright lady.