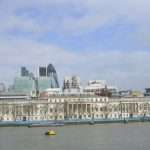 Mr Howe, our economics tutor, had to work hard to explain to our class concepts that at the time seemed just stuff to be learned in order to pass the exam. It probably would not have occurred to him that thirty-five years later the subject of a Friday morning class might help a struggling understanding how life in our society comes to be as it is.

‘Marginal propensity to save’, he had written on the board, ‘MPS’. It was part of a diagram explaining how economies grow. Savings were withdrawals from the circulation of money, so dampened any growth that might take place (in the 1970s, not much). He explained that more affluent people saved more, because they had more to save, and that if one really wanted money to be spent to inject activity into the economy, then money should be put into the hands of the less affluent.

Why did the less affluent spend more? It seemed a conundrum not explained in our classes. Obviously there was a need to buy the stuff needed for everyday life, but, if there was any left over, why spend what cash they had spare?

Providing pastoral care to members of a poor urban community gave an insight – it was about time perspective, live for today because there might be no guarantee one would have money tomorrow. Talking to a community leader in a situation where there were high levels of substance abuse and violence, he suggested that the next benefit day was the longest perspective some of them might have.

In communities in mid-Africa far poorer than anything that might be imagined in Europe, the propensity to save was even lower, and yet there seemed a joyful exuberance among people whose everyday situation was, from a European perspective, unbearably bleak. ‘It’s about your time perspective’, a friend commented, ‘if you do not know that you will be alive tomorrow, then you might as well be happy today’.

Simon Kuper, writing in the weekend edition of the Financial Times, identifies an ever widening gulf between those who save and invest for a long-term future and those for whom the present day is the one in which to live. The gap between them is perceptible in terms of life expectancy:

A boy born in wealthy Lenzie outside Glasgow can now expect to live 28 years longer than a boy born a few miles away in the poor inner city. With some experts predicting that half of Britons born since 2007 should live to 103.

There seems a conundrum to be solved. In order for the quality of life of those in the inner city to improve, there needs to be a shift in time perspective and saving, but for that time perspective and level of saving to change there needs to be an improvement in their economic circumstances which requires economic growth, and that economic growth requires that people spend their money.

A conundrum to be solved.

‘Indeed,’ Mr Howe would have said.