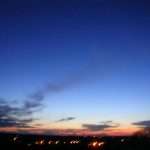 Scientists are debating whether the Voyager spacecraft has finally exited the Solar System – if it has, it will be the first man made object to do so, but the speed of its progress is hardly impressive – it was launched in 1977. The optimism of the late-1960s, when Neil Armstrong declared his belief that travel to the moon would be routine by 2000, was never fulfilled.

Perhaps the period of the Space Age was too optimistic. Joni Mitchell’s lyrics for ‘Woodstock’ include:

Maybe it was ‘the time of man’. Armstrong had walked on the moon; the civil rights movement was asserting human equality; a social revolution was manifest in the emergence of the ‘permissive society’. The times were memorable, historical.

But the times seemed to stop. Our ability to go into space has been in a state of suspended animation since the days of the Apollo missions. Science seems to have been unable to make progress in building space vehicles that might travel faster.

Where science has made huge advances is in those areas where there is a market; where people can shop for the products. Pharmaceutical companies have prospered, particularly where drugs have offered lucrative returns. Nothing can compare with the information technology revolution, computers, telecommunications, television and music systems; there are things we could not have imagined thirty years ago. There are times when it seems that the whole of human scientific endeavour has been directed towards attaining the point where spotty youths on trains can sit with their feet on the seats sending pointless text messages to friends they saw five minutes previously or will see in five minutes time.

Scientific research is only possible with funding. Available public funds have been severely reduced by the recession. The private sector depends on profit so will tend to provide funding where research can be shown to contribute to a growth in income. The situation created, in blunt terms, is that science will produce whatever we will shop for. Extraordinary mobile phones are possible because there are people with money to pay for them, while elementary illnesses persist in Africa because the people cannot afford to pay to end them.

Voyager may remain our most travelled product for generations to come, for, unless there is a profit to be made, no-one is going to launch anything else like it.