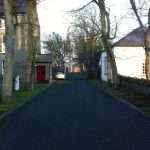 The car heater took the edge off the March chill. ‘Danger of ice’ flashed the warning on the dashboard as the temperature dropped from four degrees to three (bizarrely, it flashes the same warning when the temperature rises from minus four to minus three). The news on the hour was followed by a weather forecast that offered little respite in the days ahead.

A man who stopped in the street to chat yesterday said he had heard on the BBC that it was the coldest March for fifty years. ‘The winter of 1963’. he said, ‘that would be before your time’. To have contradicted him would have seemed ungracious but I could have shown him a picture of myself standing beside a snowman built in the depths of that mythical season.

‘When will the winter end?’ I thought, negotiating a roundabout at a motorway junction.

‘When the winter ends’, the lady had said that the last time I had seen her. Living in sheltered accommodation, she was reclusive. Her main interest in life was her son, whose occasional appearance were the moments for which she lived. ‘He’ll come to see me’, she said, ‘when the winter ends’. There had been a momentary temptation to point out that he lived in Belfast, less than thirty miles away, and that, although it was January, the weather was mild and dry, but what was the point in causing unnecessary upset?

‘I was going to come when the winter ended’, he said when I met him. His car was parked outside her house; the undertaker had just left.

The police had phoned me that morning, they believed something had happened to her and they would like a clergyman present when they forced the door. The woman’s body was lying on the hearth rug, the paper she was twisting as fire lighters still in her hands. The heart attack that had taken her must have been sudden and massive.

The funeral had been respectably attended, the son’s presence brought friends from Belfast uninhibited by the thought that it was still winter. What went through his mind as he sat in the front row with the coffin a few feet away? Maybe he believed his own story, that driving from Belfast in winter months was hazardous – despite the fact that our area had an abundance of people who drove to and from the city for their daily work. I never saw or heard from him again. A furniture van came and removed her few pieces of furniture and it was soon as though she had never existed.

When will the winter end? It doesn’t matter. Get on.