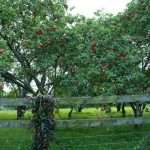 The River Nore is in flood north of the city of Kilkenny. As if the past year had not been difficult enough for the farming community, acres and acres of land along the river’s banks are now under dirty brown water. The scene resembled the landscape of my home area, the Somerset levels, in the middle of winter; the water there would sometimes lie for weeks, its retreat in the spring perhaps contributing to the county being named the ‘summer lands’.

As if thoughts of Somerset could mysteriously transmit themselves from a small Peugeot car, on an Irish country road on a wet March evening, to a radio station in Limerick, the announcer played a piece of music that would once have been instantly recognizable to many of the inhabitants of Somerset farms. ‘The Academy of Saint Martin in the Fields conducted by Sir Neville Marriner playing the third movement of Vaughan Williams’ English Folk Song Suite: Songs from Somerset’.

Somerset was once so filled with songs that one of England’s most famous composers could write a medley of them. Even in my own village a hundred years ago Cecil Sharp, the collector of folk songs, had written down songs sung by Frederick Crossman, my great, great uncle; songs that were sung by his granddaughter, Mrs Amy Ford.

Perhaps there are still corners of England where a latter day Cecil Sharp might find enough songs to fill a songbook, such a collection of folk songs in 21st Century Somerset would probably create a very slim volume. Somewhere that sense of local identity that was the heritage of Fred Crossman and Amy Ford got lost along the way. Perhaps it was due to the mobility of the population, perhaps it was due to the uniform culture brought by the mass media, but the songs were lost. Attending primary school in Somerset in the 1960s, I can recall learning no local songs. We could sing the Canadian song ‘Land of the Silver Birch’, but we could sing nothing from our own community.

Will someone in the future drive down the Nore Valley and listen to a medley of Irish tunes and think to themselves that once the people of this country had sung their own songs? Will they look at a photograph of some forebear who sang songs from the community and wonder why they were taught none of the songs? Will they wonder what it was that caused all their songs to disappear?