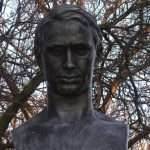 A bright moment today, primroses on the roadside at Camross. However, stepping out of the car in the hospital car park in Portlaoise quickly disabuses one of the impression that the winter might be past, ‘a wind like a mother in law’s breath’, as an Ulster friend used to comment. May is only four weeks away, why is the whole countryside not bursting with life? If May is soon, if the summertime is coming, why are the trees not sweetly blooming and the wild mountain thyme not growing all around the blooming heather?

Instead of the forecasters at Met Eireann, what we need is poets who would change things. Poets who can rewrite the story so it’s different. Watching footage of Easter 1916 while doing nothing yesterday, brought memories of Yeats’ opening lines of Easter 1916?

I have met them at close of day
Coming with vivid faces
From counter or desk among grey
Eighteenth-century houses.

Write what Yeats says in prose terms, and it becomes dirty old Dublin in the evening with blokes coming home from their work, yet in his lines, even the tenements assume a romantic aura.

Months after Easter 1916, To My Daughter Betty, The Gift of God, is written by Tom Kettle, two days before he dies. ‘In the field, before Guillemont, Somme, Sept. 4, 1916’. It transforms the bloodiness of the trenches into something of cosmic significance.

In wiser days, my darling rosebud, blown
To beauty proud as was your mother’s prime,
In that desired, delayed, incredible time,
You’ll ask why I abandoned you, my own,
And the dear heart that was your baby throne,
To dice with death. And oh! they’ll give you rhyme
And reason: some will call the thing sublime,
And some decry it in a knowing tone.
So here, while the mad guns curse overhead,
And tired men sigh with mud for couch and floor,
Know that we fools, now with the foolish dead,
Died not for flag, nor King, nor Emperor,—
But for a dream, born in a herdsman’s shed,
And for the secret Scripture of the poor.

Maybe we need big things to happen for poets to find the energy to transform things.

Would Seamus Heaney have found the same inspiration had he grown up here, rather than in the rawness of Ulster? Would Requiem for the Croppies have the same sense of tragedy had it come from a writer reflecting on an historical event from a life lived amongst the peaceful and the mundane, rather than someone watching tragedy in his own community?

Do extreme events create a heightened awareness of the detail and the reality all around?

Maybe there is trade off – the peaceful or the poetic? Maybe cold and grey Easters are preferable to ones that might inspire a poet.