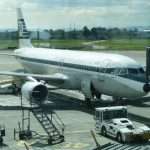 His sister could not remember how he had met his wife; perhaps at a dance somewhere. The marriage had taken him from a townland midway between Dublin and Limerick to a small farm on the borders of Leinster and Ulster.

In rural Ireland of the 1950s, deep in economic depression, there were few livings that were not hard earned and the few acres he attempted to work offered little future; he kept a small shop to try to supplement the shillings earned with the farm work. Eventually,  the hard decision was taken, he and his young wife would emigrate, and they would take her mother with them.

The farm was was sold and in 1956 they sailed for Adelaide in Australia. Reading the ship’s passenger list for March 1956, the  typewritten details arranged in neat rows and columns, makes the matter seem so domestic and straightforward; the farm and shop qualify him for the description ‘businessman’ in the occupation column, his wife and mother-in-law are both described by the term ‘housewife’, despite the fact that it was the mother-in-law’s farm that had been sold.

Adelaide had been chosen because there was an ‘uncle’ who lived there who had assured them in various letters that he would give them help when they arrived. On reaching the city, the uncle proved elusive and they were left to find their own way. There was to be no fairy tale progress, but he found shop work and his wife found work as, in the words of his sister, ‘a children’s teacher of some sort’.

They did not achieve fame or fortune, but they did find security and contentment and had no desire to return to the place of the small farm. He died this morning at about 3.30 am Irish time, whatever time that was in Adelaide. He was 91 years old and regarded the country in which he had lived for 56 years as his home.

His sister was not sure where he had lived, ‘For years, I knew his address by heart, then the telephone came along’. They had phoned each other every week.

If someone could leave 1950s Ireland and easily slip into a new life in times when air mail letters were the only means of communication, how much more easily will those leaving now go and not come back? Who will want to remain in an Ireland moving progressively deeper into long term recession? (When does a recession end and a depression begin – unemployment and under-employment are said today to aggregate some 23% of the workforce?). In an era of Skype, Viber, and every other imaginable form of computer communication, the main challenge will be to remember the time difference.