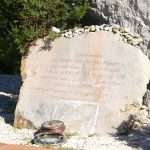 The ladies in church expressed continuing concern for my health. ‘Be careful’, ‘take it easy’. I smiled politely and thanked them for their entreaties. Being mothered evokes memories of childhood days and struggles with severe asthma.

Sitting in front of the television at 10 o’clock on a Sunday night, Michael Portillo’s ‘Perspectives’ programme on Pablo Picasso recalls the Spanish Civil war. Portillo describes how his own father opposed Franco and was driven into exile. What is possibly Picasso’s greatest painting, ‘Gernika’, was the artist’s protest against the bombing of the Basque town by German bombers supporting Franco in 1937.

It’s hard to imagine that such men living in such times were ever told to ‘be careful’, or to ‘take it easy’. In those times, even being a Church of Ireland clergyman was not an obstacle to participating in events that would leave their imprint upon history. To have lived a life that was not careful would have been a simpler option in the 1930s.

Who would think the Spanish war
Flared like new tenure of a star,
the way our rhymes and writings are?
That Hilliard spilled his boxer’s blood
Through Albacete’s snow and mud,
And smiled to comrade death, Salud.

Hilliard, a boxer? Certainly he was, but, in college days, thirty years ago, he was a hero. One lunchtime, sat outside a lecture room in the soulless corridors of the Arts Block in Trinity College, Dublin, his nephew Stephen told the story of the Reverend Robert Martin Hilliard.

Dead by the age of 34, Robert Hilliard seemed to do so much in a single life. Stephen told of his uncle’s parting company with Trinity College over politics; his career in advertising; his proficiency as a boxer; his involvement with the Moral Rearmament movement and the return to Trinity and ordination; then the final twist in the tale, as his old radicalism reasserted itself and he went off to die in Spain.

It is hard to think of another Church of Ireland cleric who would merit a place in poems and ballads. We are now the essence of carefulness and ease. No future generation will recall events where a clergyman merits a place among the names of the heroes.