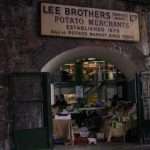 Mrs Thatcher’s death reminded me. Even at the time, we knew: the events of 1979 were epoch making. But when you are eighteen, going on nineteen, there are more important matters than elections, revolutions and wars. Earnest students might sit in the LSE bar discussing Marxism and the need to organize the workers, others were more concerned with important things – like music and sport and girls.

The autumn of 1979 was the only term I really spent at the London School of Economics. The following term, I moved out of the hall of residence to live with family; the term after that, I dropped out altogether. When returning a year later, I registered, turned up at lectures, wrote the essays, and sat the exams, but never re-engaged with student life. I knew no-one and spoke to no-one. I got a 2:2 degree, conferred in absentia – who would want to turn up at the graduation to receive a 2:2 at the LSE knowing that the ceremony would be dominated by those who would become great and important? Since leaving in 1983, I have never returned. For a while, they sent an alumnus magazine filled with pictures of graduates who had gone on to become great and important people doing great and important things, but that eventually faded away.

For one term only, I lived London student life: going to see the Royal Shakespeare Company at the Aldwych on Monday nights on student standby tickets that cost £1.10 each; going to concerts in places like the Tottenham Court Road; going to discos and parties. Every experience seemed an intense contrast with an upbringing in rural England.

In 1979, London was at the point of transition from its old self to the new, brash self it was to become during the Thatcher years. There was still a pie and mash shop in a street close to the student hall in Rosebery Avenue. Clerkenwell Market still had market traders who could have told tales of the city in wartime. Mount Pleasant sorting office was at the heart of the post office when writing letters was still a key means of communication. At the tube station at The Angel, the platforms were still reached by lifts with folding gates.

There was an intensity about everything in those weeks, even the colours are bright in the memory: the reds and greens of the Underground trains, in the days when carriages on some lines still had wooden floors: the blues and yellows of the British Rail locomotives; the whites and the purples of discos, lit with ultra violet light.

Ten weeks, less than a fifth of a year, yet memories remain clear. In the personal as well as the political sphere, the days of Margaret Thatcher left a profound imprint.