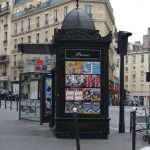 The BBC marked Joan Bakewell’s 80th birthday with a BBC 4 ‘Bakewell at the BBC’, a look back over fifty years of television programmes. There was a magical quality in some of those encounters; people who were legendary in their own lifetimes chatting with the beautiful young Ms Bakewell.

Perhaps it is living in a 21st Century culture where anyone can be a ‘celebrity’ that makes it seem odd that people who really were significant should take time to chat with a television journalist; it is easy to forget that television was something hugely significant in the 1960s, that the audiences for even minor programmes might run into the millions.

Among those encountered was French fashion designer Pierre Balmain. Even as a teenager who knew nothing about Paris or haute couture, I knew about Balmain. Anyone who had a copy of Peter Sarstedt’s 1969 record, ‘Where do you got to my lovely?’, and who had played it repeatedly to be sure about the lyrics, knew about Pierre Balmain.

‘Your clothes are all made by Balmain’, sang Sarstedt about the lovely one described in the song. Seeing the dresses shown by Balmain to Joan Bakewell, it was easy to see how they would find their way into the lyrics of a pop song. Striking, exclusive and very expensive, they were an unmistakeable statement; if the person wearing them had come from humble roots, then they had travelled a very long way from the person they had been.

The woman who inspired Sarstedt’s song is said to have died in a hotel fire in Vienna in 1965, but there must have been many more like her, many like Marie Claire in the song. There must have been many people who had spent their childhood among the ashes and chaos of 1940s Europe and who had emerged determined to forever leave their pasts behind.

In recent years, trips to Paris became opportunities to spot Marie Claire, or, at least, spot candidates for the character of Marie Claire. Standing at the top of the Eiffel Tower one Sunday afternoon in 2004, we looked down on the sea of buildings around and tried to decide which apartment would be similar to that of Marie-Claire; walking through the streets we wondered where she might go for her shopping. Where would Marie-Claire buy her baguettes and croissants?

Sarstedt’s song was recorded in 1969; we reckoned Marie-Claire was maybe 24 at the time, born around 1945. We decided that she would have married twice, but that both marriages would have failed and she would be leading a fairly solitary existence now. Marie-Claire would be dressed in haute-couture and would look younger than her age. Walking the Boulevard Saint Michel on a Sunday afternoon a couple of years later, I looked for her. It was, of course, a vain task; on a Sunday, she would be having lunch with friends.

Perhaps the BBC could do a programme on Marie Claire at 70, looking at the people and places named. Having met the legends, Joan Bakewell would be the perfect presenter.