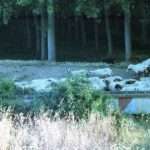 An August evening twenty-five years ago, we were on a camping holiday near Leon in northern Spain and had gone for a walk into the village near our campsite. The day had been exceptionally hot and the afternoon had been marked by a great stillness. When the evening came, the community resumed its usual activities, the shops re-opened and business began again.

Walking on the country road that led to the village, we saw a scene that might have come from a Bible story. Over to our right, beyond a concrete viaduct that carried water to farmland, a shepherd was leading his flock homeward. He carried no stick and there was no sheepdog to obey his calls, instead he called quietly from time to time and the sheep came running toward him.

We stopped and watched as they went on their way. The shepherd had great confidence, he seemed not to need to turn to check that the flock were following. He kept walking, happy that his sheep would hear his voice and that they would follow him.

On this Good Shepherd Sunday, the words of Saint John Chapter 10 Verse 27 should make us think about what it means to follow Jesus.

‘My sheep hear my voice’, says Jesus to his listeners.

If the sheep in that flock in Spain had not heard the voice of the shepherd, they would not have found their way home that evening; they would have found themselves wandering in the cold and the dark, and, when night fell there, it got very cold.

Finding our way depends on hearing Jesus’ voice and hearing his voice depends on us being prepared to listen. Our picture of the Good Shepherd is usually one of a shepherd who will come to find us wherever we are. Certainly, that is what Jesus does, but he also expects that we will respond, he expects people who, having heard his voice, listen to it.

Our God is not a shepherd who walks behind us with a big stick and with dogs snapping at our heels, he is one who walks before us. Having gathered us into his flock, he expects that we will follow him. He expects that his voice will be sufficient to keep us together with the flock, that his voice will be sufficient to prevent us straying and becoming lost.

Do we hear the voice of the Good Shepherd?

‘I know them’, says Jesus. Today, shepherds in Europe do not need to know their flocks in the way they once did. The ear tags carried by lambs and sheep can instantly identify to whom an animal belongs. To steal a tagged sheep would be pointless, that tag shows its owner and without that tag it has no value for sale. In Jesus’ time, things were very different, not only were the sheep unmarked, but different flocks might graze together, shepherds joining together for company and for safety. In such circumstances, the shepherds work depended upon him knowing his own sheep.

Many Christians behave as if the Shepherd did not know them. Our faith is pushed into a box, an hour on a Sunday morning. Yet we have to ask ourselves what sort of God we believe in if we think that we can be one person on a Sunday and a completely different person on a Monday. What sort of God do we believe in if we think God is not aware of the whole of our personalities? We make little of ourselves if we are not honest with ourselves. What sort of Shepherd would we believe Jesus to be if we thought he was only around when it suited us?

Watching that flock on that warm Spanish evening, they passed through a piece of woodland. A group of sheep became separated from the main flock, and, as soon as they emerged from the trees, came running to rejoin the flock, the shepherd’s voice enough to bring them back.

‘They follow me’ is a challenge to us, because sometimes our following of Jesus is done with slow footsteps, and, sometimes, there are moments when it doesn’t happen at all. The number of people whose commitment to following Jesus is like sheep running to rejoin the flock is fairly small; most of us go along fairly slowly. We have to ask how we see God if we think we can follow at a speed that suits us and can stop altogether if we wish.

‘My sheep hear my voice. I know them, and they follow me’. We need to think about what each of Jesus’ words means for each of us. 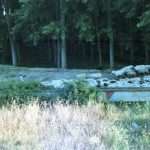