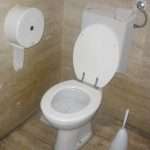 The loo is one of the most interesting I know. On the wall there is a print of the map of the London Underground, but the lines are called Film Stars, or Monarchs, or Writers. Instead of taking the Victoria Line and changing at Victoria Station for the District and Circle Lines, one can take the Italian Artists’ line and change at Raphael for the Explorers’ and Philosophers’ Lines.

Odd things are hung on toilet walls, one rectory has a certificate from 1829 of a forebear’s admission to the masonic order, one has details of vintage French wines, others have eclectic documents and miscellaneous pictures. Eccentric taste and a bizarre sense of humour seem to shape the selection of material for the smallest room (though there are many rectories where the room is far from small).

Toilets are sharp in the memory. Our toilet was outside, a paraffin heater was required in the winter time to stop it freezing. The toilet at our grandparents’ farmhouse was inside, though was as cold as if it were outside. The memories of staying at the farm during the 1972 miners’ strike are vivid: power cuts meant keeping a torch at the bedside in order to be able to find the way down the stairs and through the kitchen and down a passageway.

Toilets determined the assessment of summer holidays. Campsites in the 1970s were not as sophisticated as they are now. Armed with a roll of Andrex and walking through a field to find the way to a block, where one held one’s nose and trod carefully, tended to detract from the enjoyment of the location.

Toilets loomed large at big gatherings. Football grounds that provided no more than walls, rock festivals where the facilities were overflowing by the second day, fairs where one stood in line to dodge behind canvas walls: a few moments could spoil an entire day.

Toilets seem to have an undue amount of influence in shaping perceptions of a place. Questioned by a colleague about what it was really like in Africa, various reassurances did not seem to convince. We went through a list of fears – insects, wildlife, food, travel, and then the crunch question – ‘but what are the toilets like?’

Surely there are people who could go to a place and not even notice where they had gone? Surely, the whole of human history has not been shaped by what the conveniences were like?